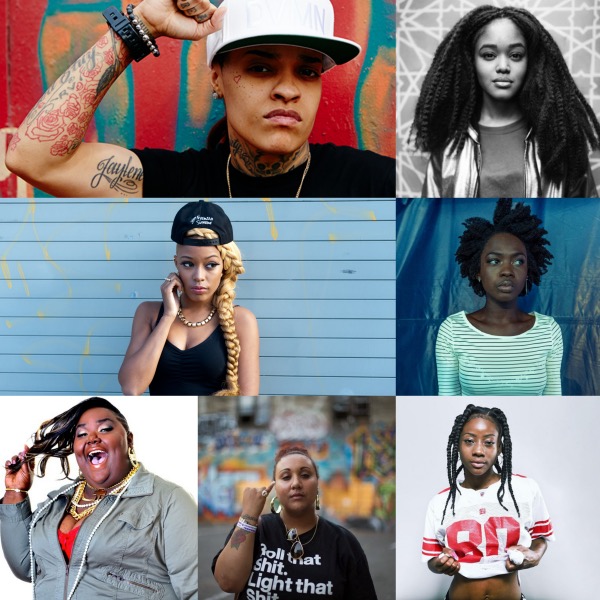 The original incarnation of this post was inspired by a series of articles that lamented the serious lack of women in hip-hop. While hip-hop’s always been a boy’s club, of sorts, there’s never been a shortage of women artists holding it down and holding their own.


This latest version of our women rappers list also includes a few repeats from the original list that you still should definitely check out.

The only rapper from Australia who we acknowledge ’round these parts, Maidza has drawn some serious comparisons to Azealia Banks for her 90’s-inspired aesthetic and her flawless fusion of house/club music with hip-hop.

We featured this 20-year-old Southern Belle in 2015. Her eclectic, experimental, sound definitely makes her one to watch.

Honey the Hippie is a 19 year-old lyricist who hails from Detroit, Michigan. Her stage name comes from her government name, Oyinkansola, which means “sweet like honey” in Yoruba.

The Saint Louis artist burst onto the scene last year with her a serious banger, “Important,” which highlighted her lyrical skills and preached body positivity.

You might recognize Sonyae Elise from the Bravo reality show Platinum Hit. Since then, the artist, who counts Billie Holiday and Tupac as influences, has gone onto bigger and better things.

This New York-based dynamic duo went viral in 2014 with their video for “Wimbledon.” They’ve since been signed to a major label and recently released an EP.

The Timbaland protégé first burst onto the scene as a teenager. Over the year’s she’s refined her sound, but stayed true to herself as a person and artist.

The Philly native, whose also a working fashion model, is quickly gaining a following for her laid back, but no holds barred style.

The Florida native who first started recording music at the age of 7 is definitely headed for big things. Similar to Nicki Minaj, her style waivers between hard-hitting rhymes and radio-ready tracks.

This artist reps the DMV right with an eclectic, creative sound and a serious sense of humor.

This Philly girl has performed for a slew of artists including Talib Kweli, Meek Mill, T.I., and Rick Ross.

BIZZARH is a Toronto-based duo of Charli Champ and Dollar Paris, that sounds like part-Erykah Badu and part-Bahamadia. The group, who entered the industry as teens, also keep good company, as they recently opened up for Willow Smith.

This Kenyan rapper is considered part of the new guard of artists helping to usher hip-hop from Africa onto the global stage.

This Seattle-based lyricist counts Queen Latifah as a major influence.

This Virginia native grew up being forbidden from listening to rap music, but her love of poetry eventually led her to start writing her own rhymes.

She first stepped onto the scene as a Timbaland protégé, but according to her latest freestyle she’s striking out on her own, with no love lost.

This Sisterhood of Hip Hop alum, who is based in Bed-Stuy, Brooklyn, and Los Angeles, has been steadily putting out tracks over the past year.