Ava DuVernay Knew That She Was Going To Get Snubbed At the Oscars. 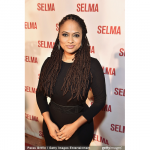 Selma filmmaker Ava DuVernay knew well before we did that she was going to get snubbed at the Oscars. A profile of the director in Entertainment Weekly which took place last month, but was published yesterday reveals,


“It would be lovely,” she told EW over lunch in L.A. on Dec. 18. “When it happens to whomever it happens to, it will certainly have meaning.” But it would not be her. “This is not me being humble, either,” she said. “It’s math.”

The piece also pointed out the lack of diversity within the Academy as a factor for the snub,

The directors’ branch of the Academy is, quite literally, a boys’ club. According to a 2012 study by the Los Angeles Times, the directors’ branch is 91 percent male, and 90 percent white. That alone wouldn’t prevent a DuVernay nomination, of course, but her lack of personal and professional connections with those directors would, she thought. “I know not one person in my branch,” she said.

The piece also posited that feelings about DuVernay’s activism in light of recent events, also played a part in the snub. Some rather defensive insight from one member of the voting board, who spoke to Entertainment Weekly under the condition of anonymity seemed to confirm just as much.

Just as when Zero Dark Thirty smashed into real-world events that snuffed out its Oscar hopes, Selma marched into theaters just as the country was swirling in racial tension. In November, after Officer Darren Wilson was not indicted for the shooting death of Michael Brown in Ferguson, Mo., DuVernay joined other black filmmakers in protest, asking her 58,000 Twitter followers to boycott all retail stores on the day after Thanksgiving, Black Friday. And last month in New York, after a grand jury declined to charge the officer who had caused the death of Eric Garner using a chokehold, she and her cast gathered on the front steps of the New York Public Library, without the knowledge of studio publicists, dressed in “I Can’t Breathe” T-shirts.

Journalists consistently—and accurately—drew a line between the film and current events. Oddly, this seemed to rankle some Academy voters, as if DuVernay, the media, and the film’s campaign were all saying: If you don’t vote for Selma, you’re not taking a stand against this outrage. “It’s almost like because she is African-American, we should have made her one of the nominees,” says one member. “I think that’s racist. Look at what we did last year with 12 Years.”

Overall, I can’t say that I was surprised at the snub. Hollywood is all about politics, and racial discrimination in Tinseltown is systemic.