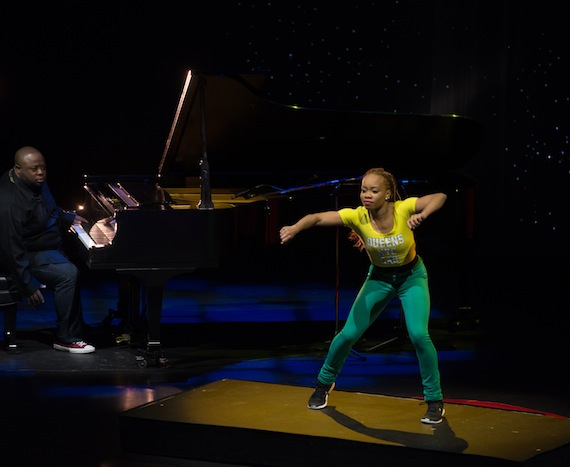 In BLACK GIRL: Linguistic Play choreographer and performer Camille A. Brown employs a range of African-American cultural dance and movements, from social dancing to double dutch, steppin’, tap, Juba, and ring shout. Brown uses these diverse styles, with movements of varying intensity, to create a nuanced narrative about black women. The rhythmic movements also seek to form an identity separate from the narratives that are often placed upon black women in America.


BLACK GIRL: Linguistic Play reveals the complexity of carving out a self-defined identity as a black female in urban American culture. In a society where black women are often only portrayed in terms of their strength, resiliency, or trauma, this work seeks to interrogate these narratives by representing a nuanced spectrum of black womanhood in a racially and politically charged world.

Camille A. Brown performs with live music by composers Scott Patterson and Tracy Wormworth, as well as with costume design by Project Runway alum Zulema Griffin.

BLACK GIRL: Linguistic Play, which has been hailed as ” dance in its most humanistic form: the embodiment and questioning of cultural norms that manifest in muscular holding, posture, gesture, and breath” will premiere this September in New York at the Joyce Theater.