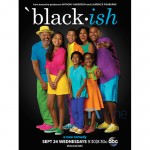 Created by Kenya Barris and starring Anthony Anderson and Tracee Ellis Ross, “Black-ish” might finally be the post-post-racial black family comedy we’ve all been waiting for.


Even the show’s description which reads,

Andre ‘Dre’ Johnson has a great job, a beautiful wife, Rainbow, four kids, and a colonial home in the ‘burbs. But has success brought too much assimilation for this black family?

indicates a level of racial awareness in comedy that black family sitcoms haven’t traditionally been given the chance to really explore. Watch the trailer below.