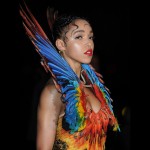 The fashion industry suffered a great loss when legendary designer Alexander McQueen tragically took his own life in 2010, at the age of 40.


Throughout his career, the designer was a deeply beloved rebel who pushed boundaries, often mixing the macabre with the elegant.

In 2011, “Alexander McQueen: Savage Beauty,” an extensive retrospective of the designers work opened to huge crowds at The Metropolitan Museum of Art in New York City. The wildly popular show was one of the highest selling exhibitions in the history of the museum.

Now the exhibition has found it’s way to London, McQueen’s hometown, and critics are raving about it.

Last night, London’s fashion “it” crowd gathered to celebrate the designer rocking some of his most iconic looks.