Columbia Student Who Was Reported Missing Pens Essay About Her Disappearance. 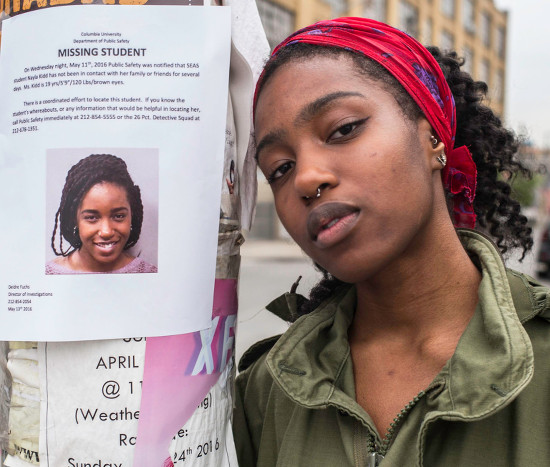 Nayla Kidd for The New York Post by J.C. Rice.

I want to continue my modeling career and see if I can make money doing freelance gigs. I’m back in touch with my friends and family, but I’m not going back to how things used to be.

Earlier this month, news that Nayla Kidd, a 19-year-old engineering student at Columbia University had gone missing, quickly went viral. “Missing Person” fliers with images of Kidd were posted all over the city, and supporters feared the worst for the promising student who seemingly vanished.

Kidd was found safe and sound last week. It turned out that she had changed her phone number, shut down her social media accounts and moved into an apartment in Brooklyn’s Bushwick neighborhood, in an attempt to start a new life. Kidd penned an essay about the motivation behind her decision to disappear and not tell her friends and family.

I needed to break from my old life of high pressure and unreasonable expectations.

I grew up in Louisville, Ky., where my mom, LaCreis, worked as a cancer research scientist at the University of Louisville. It was just her and I; she raised me as a single mom.

I was always very independent, even at a young age. Louisville bored me, so when I was going to start high school, I insisted on moving to California to attend boarding school.

My mom didn’t want me to move so far away but supported my ­decision.

I got into Thacher, a highly competitive prep school in Ojai. Not long after I started, I became known as “The Science Girl.”

In my sophomore year, my chemistry teacher announced to all 240 students at an assembly that I had scored highest on the Regional Chemistry Olympiad — a national chemistry competition.

The teachers also used my homework as an example of what other students should strive for.

I enjoyed the praise and self-worth I felt when I excelled in school, and I wanted to keep aiming higher.

The ultimate climax was when I got into Columbia. Because it’s such a prestigious school, it made me feel like I had proven to myself, and everyone around me, that I made it.

And it seemed natural that I would continue to study science in college.

I had always fantasized about living in New York, but the first day I moved it was also my birthday. I felt really alienated and alone and didn’t find the Columbia students very welcoming.

Kidd’s essay drew mixed reactions. Many were sympathetic to her struggles with depression and mental health, others simply felt that she was simply spoiled and entitled. A number of current Columbia students and alumni also related to her experience.

Kidd’s mother, LaCreis Kidd, who raised Nayla as a single mother, also penned her own essay, talking about their reunion.

“When I was finally re-united with Nayla, it was a bit awkward,” she wrote. “How could she just cut me off like that? But I told her I love her and I don’t care what’s going on in her life, she should know she can always talk to me. I’m not angry, but I’m still recovering from such a traumatic experience.”

Regardless of our personal feelings about Nayla Kidd, it’s important to remember that at 19, she’s still young and still figuring things out. I hope that she finds the help that she needs, on all fronts, and I also hope that we continue to boost the stories of black women who have gone missing.