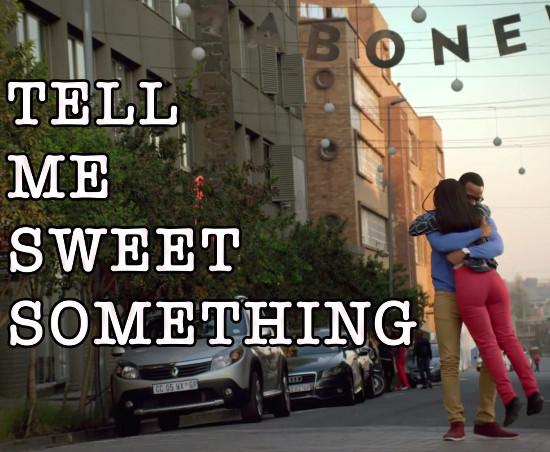 Created by Nigerian filmmaker Akin Omotoso, Tell Me Sweet Something is part of the growing new guard of films that highlight modern South African youth culture and the lives of 20-somethings. The film was inspired by the African American classic Love Jones, and by Omotoso’s love of Johannesburg, the city in which the tale takes place.


“Boasting a star-studded cast, “Tell Me Sweet Something” stars Nomzamo Mbatha, Maps Maponyane, Thishiwe Ziqubu, Kagiso Lediga, Thomas Gumede, Thembi Seete and Mandisa Bardill. The film was inspired by Omotoso’s love of love songs, the film Love Jones and his desire to tell a story that celebrates love in the city he loves- Johannesburg.

“Tell Me Sweet Something” tells the story of Moratiwa (Mbatha): an aspiring novelist with writer’s block. She hasn’t had much luck with love ever since her ex-boyfriend Norman went out to buy milk and never came back. Tired of having a recluse as a best friend, Tashaka (Ziqubu) convinces her to party up a storm at a new club in the city; it is here that she meets South Africa’s no.1 celebrity model Nat Masilo (Maponyane) or as she nicknames him “The 45 Foot Man” on account of a huge billboard in which he features (in)conveniently situated directly opposite her bookshop.

t
Two different worlds collide in this charming, funny, romantic and very sweet film showing a side of Johannesburg that is rarely seen: The City of Gold as a City Of Love. Will they or won’t they? As Moratiwa says to Nat: “I am writing a love story.” Nat says: “Will they get together?” Moratiwa replies ‘I haven’t written the ending yet “.”

The film is set for release sometime this year, but no word yet on an international release. Follow “Tell Me Sweet Something” on Facebook for updates.