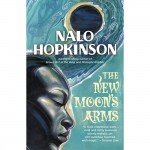 October is Black Speculative-Fiction Month. The month is drawing to an end, so it’s time to stock up your bedside table with titles by Black women authors that you can spend the next 11 months reading. Here’s my short list of great authors to introduce you to Black speculative-fiction.

The 50 Best “Ripped From the Headlines” ‘Law & Order’ Episodes, Ranked

…nearly all of the first season’s 22 episodes were based on true life events, something that probably helped the show become immediately successful, but wasn’t carried through to the following seasons.

Kortney Ryan Ziegler introduces himself as a “heterosexual black man” who grew up as a “normal little girl” in Compton, Calif., and became the first person to earn a Ph.D. in African-American studies from Northwestern University. Ziegler, filmmaker of Still Black: a Portrait of Black Transmen, is also the first transgender person known to have earned a doctorate in that discipline.

A VICE Intern Is at the Center of a Racism Row

Tori Reichel is a journalism student at the University of Vienna. He is also interning for VICE Alps. Around the beginning of the new semester, he happened to sit down on the stairs to chat with two of his friends when a photographer took their photo. So far, so not racist. But when the university’s new website launched earlier this year, Tori noticed that photo of him was being used… like, a lot. Especially on pages that said things like “INTERNATIONAL” and “WE WELCOME STUDENTS FROM ABROAD.” Which is weird, because Tori is a native Austrian. He just happens to be black.

If you are one of those people, and you’re reading this equipped with the “So, you’re saying I should just never approach a woman?” rebuttal, let me answer that question for you: Yes. I can’t speak for everyone, but that’s exactly what I’m saying. If you’re not trolling — you are, but I’ll play along — and you honestly don’t know how and when to approach a woman without making her feel unsafe, you shouldn’t approach any women until you figure that out. The world will be fine with your (hopefully temporary) removal from the dating game.

Dressing The Walking Dead: ‘We are expecting people to believe in zombies’

(this is a really great interview with Eulyn Womble, Costume Designer for “The Walking Dead”.)

I was discouraged from becoming a designer because it’s mostly the mixed-race women in our Cape Town community who worked as seamstresses or in clothing factories. My grandmother was a seamstress. My parents wanted more for me, a respectable career.