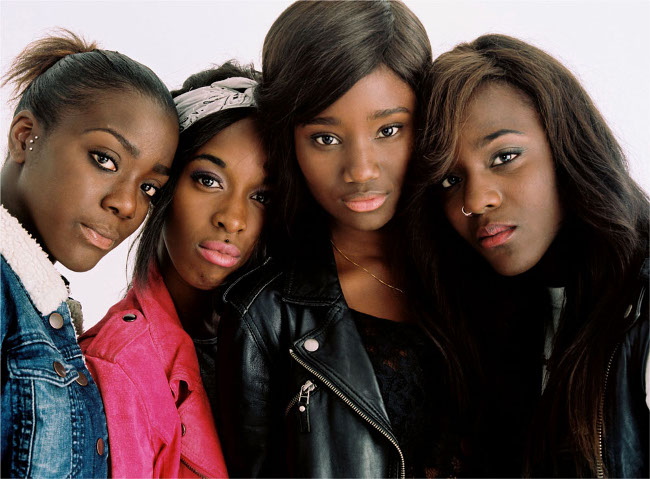 (from the film Girlhood.)


“Latino identity just does not match the standard American configuration,” Noguera said. “A disproportionate number of Latinos will identify as white even though they are not treated as white. It is aspirational; they know that “white” is considered the prestige box.”

Noguera said Afro-Latinos still face discrimination from other Hispanics. “It tends to be that darker Latinos are less likely to get the better jobs, the best positions. The only profession where Afro-Latinos are really visible is athletics, like boxing and baseball.”

2. TIFF 2014 Review: ‘Girlhood’ Captures the Unique Process of Growing Up That Many Black Girls Must Navigate. by Zeba Blay.

There is a dismal lack of great coming of age stories about black girls. There’s Spike Lee’s “Crooklyn” or Leslie Harris’s “Just Another Girl on the I.R.T.” or Dee Rees’s “Pariah” – but try listing at least six off the top of your head; you’ll likely come up short. Why? Perhaps because black girlhood is a kind of myth. Black girls don’t get to experience the awkwardness of adolescence, the discovery of budding sexuality, the gradual blossoming into womanhood.

Nearly 70% of defendants facing prostitution charges in the Brooklyn trafficking courts are black. For loitering charges, 94% appear to be black. (The group sent monitors and used open records to track 364 cases in Brooklyn and Queens, where 58% of defendants are Asian, over nine months.)

4. 10 Black Women Fitness Gurus to Watch. by For Harriet.

Despite the many stereotypes about Black women, many of us are leading happy, healthy, and fit lives. These women are our fitness inspirations. They offer tips and encouragement to keep us on the right track!