#Howitfeelstobeablackgirl. The Pains, Joys, and Complexities of Being a Black Girl in America. 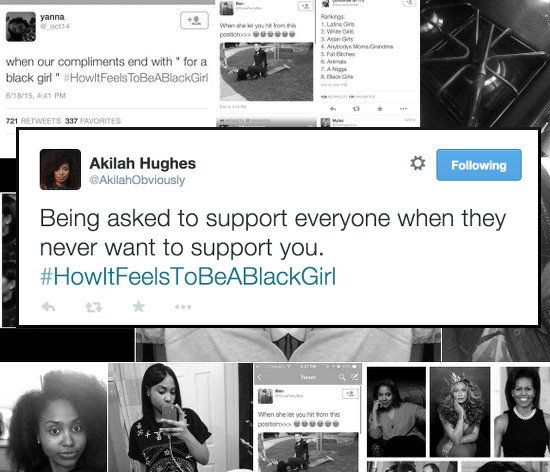 #Howitfeelstobeablackgirl is a raw, open, and honest hashtag, in which black women and girls share their truths. The hashtag, which has been trending for two days now, features a diverse range of tweets that embody the pain, complexity, and joys of being a black girl in America.


The hashtag was started by filmmaker Jada Mosely as part of the “How it Feels to be a Black Girl” movement. Mosley is the creator of a web series of the same name that features black girls from different backgrounds sharing their perspectives about various topics which affect black women and girls.

Being an adult before seeing a cartoon depicting you as a princess. #HowItFeelsToBeABlackGirl

Whats on the left is "trendy" "edgy" while the right is inappropriate &smells like weed #HowItFeelsToBeABlackGirl pic.twitter.com/IZVbFJIdFX

Black men constantly make memes about you because they are trying to justify their intraracism and self-hate. #HowItFeelsToBeABlackGirl

Seeing a cutie and wondering if he likes black girls that are as dark as I am #HowItFeelsToBeABlackGirl Madelyn (@macobbb17) June 18, 2015

Movements meant to empower black girls being appropriated by the same people who excluded us from their spaces. #HowItFeelsToBeABlackGirl