Iman Reveals She Broke The Law As a Teen To Start Modeling in New York. 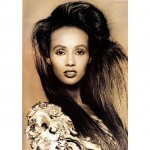 (Iman in a 1988 issue of Vogue Paris. Image by Andrew MacPherson.)

While Somalian-born supermodel Iman has lived in the United States for some time now, her first visit wasn’t exactly a legal one. She recently told New York Magazine,


“I was under 18, and to leave Kenya to come to the United States, to get a passport, you had to be 18,” she said at the Cinema Society screening of Desert Dancer on Tuesday. “So I lied and said I was 19 to get the passport, because [otherwise] I had to have permission from my parents, and my parents would never have let me come.”

She was studying in Nairobi, Kenya at the time and figured that her parents wouldn’t realize that she had left the country to head over to New York. But, she was wrong.

“You know how they found out? I was in Newsweek a week later. It’s the only magazine my father reads, and the next thing, he’s reading, and there’s a picture of me in New York, [saying,] ‘She’s the hottest model now.’”

Regardless, it definitely worked out for her.