Interviews. Visual Artist Delgreta Brown on How Afrofuturism Helps Us to Explore Our Past and Fosters Cultural Pride. 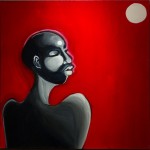 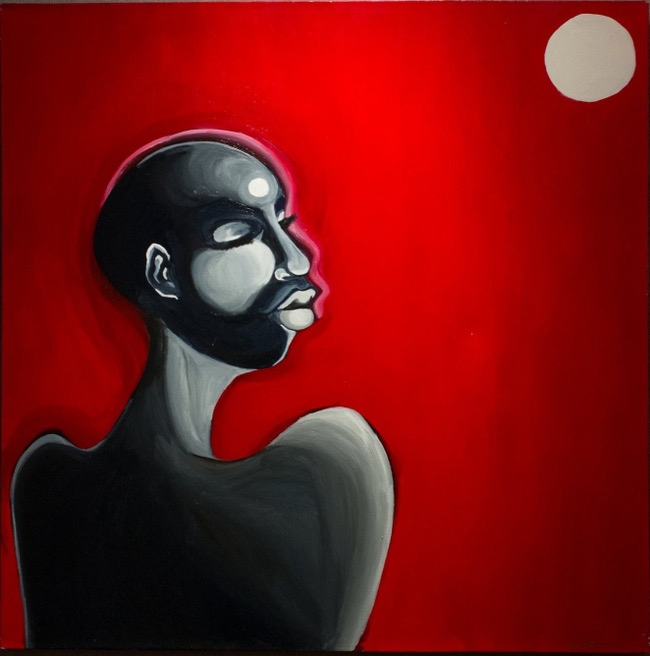 Delgreta Brown is a visual artist who lives and works in Sacramento, California. She explores Afrofuturism and the spirituality of Africa and the Diaspora, through vibrant acrylic works featuring surrealist landscapes and portraiture.


Brown artfully looks to the past, while imagining a calm, and serene future of harmony for black people all over the world.

Brown is also a lover of music and an accomplished writer.

Are your works influenced by a specific culture, religion, or spiritual belief?

My work is influenced by multiple cultures, religions and symbols as I have found many of them have a complementary flow when combined. I enjoy expressing the harmony of African belief systems with the East Asian religions. At the root of the Asiatic belief systems–once you uncover their African cultural origins, there is something wondrous in making that connection. I think it encourages African-Americans and other cultures to have a different dialgue when that happens–it places the content of the conversation beyond the American history of black history. 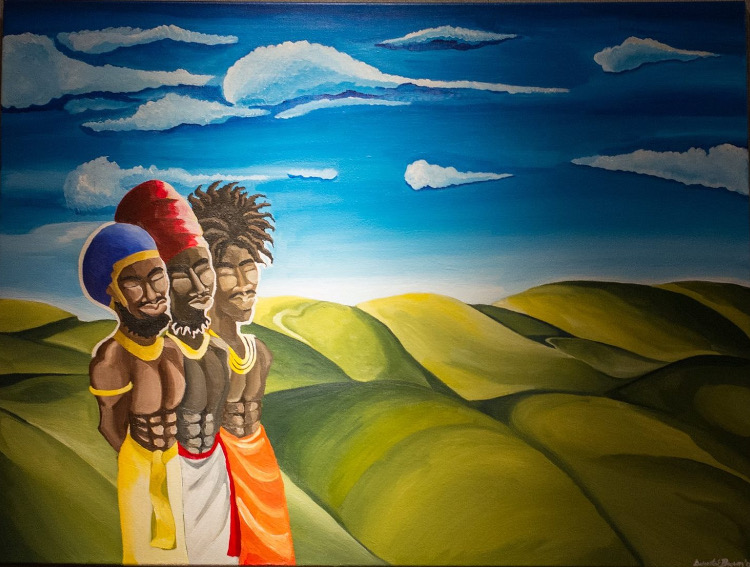 Do you also draw from personal experiences and beliefs?

Yes, an artist formulates some sort of perception about the world they’re participating in, their experiences and interpret it. My beliefs are about universality, the expression of oneness; utilizing color as a means of communication, symbolism and emotional conveyance. I derive inspiration from dreams and the love of wanting to see a brighter, positive and more prosperous future for all of humanity.

Do certain oppressions faced by African-Americans, such as police brutality, also play a part in your work?

I’m not currently engaged in that dialogue. So, much of my work focuses on uplifting, providing a source of inspiration, being engaging, and highly spiritual. I feel that there should be a balance when dealing with the heavy controversial, yet ongoing and necessary evolutionary conversations/movements African-Americans are currently enduring and/or spearheading.

Afrofuturism unveils that defining black identity is both wide open, varied and complex–exploring one’s cultural trajectory into the future engages our deepest imagination and forces us to confront and overcome our fears. And that is powerful… 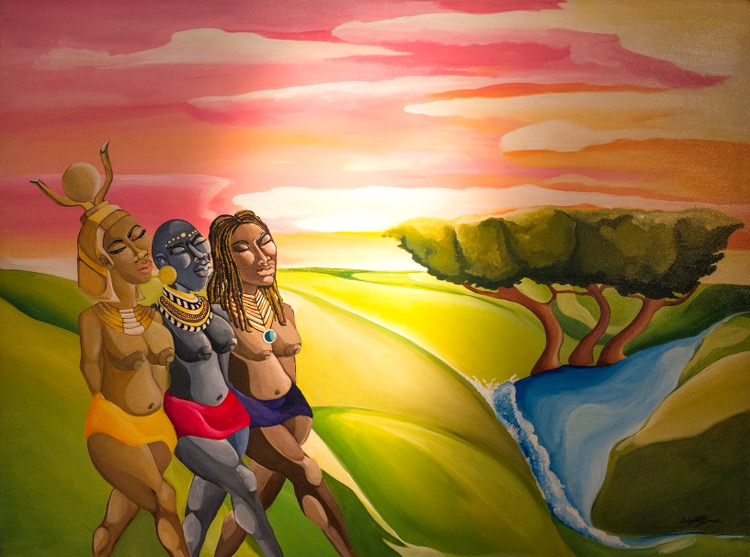 Who are some artists or writers who have informed or influenced your work?

There are many artists who have influenced me whether its mentorship in learning about the art business, education or just sharing their craft. And, I am grateful for their guidance. Some artists whose work has personally impacted me are:

Do you draw from black, African, or African-American history in your work? Do you feel that the distant past can inform the distant future?

Yes, I do draw from African/African-American history– World History. I love knowing that there’s continents the globe over with traces of the migrated, transcontinental Africanic being. With that knowledge I am free to visit any time period and create or recreate images from there and beyond. For me, that’s what helps contribute to making contemporary art that has a futuristic edge, quality or context–it utilizes a divergence from the “past” timeline/ “past” narrative.

There’s always mention of Sankofa–to go back and get…But what about bringing it forward, to the future part? I think that’s the other side of the cultural, creative & “time-travel” equation–to recollect, remember, and then create brilliantly with knowledge of self–go forward and sojourn, innovate and explore. 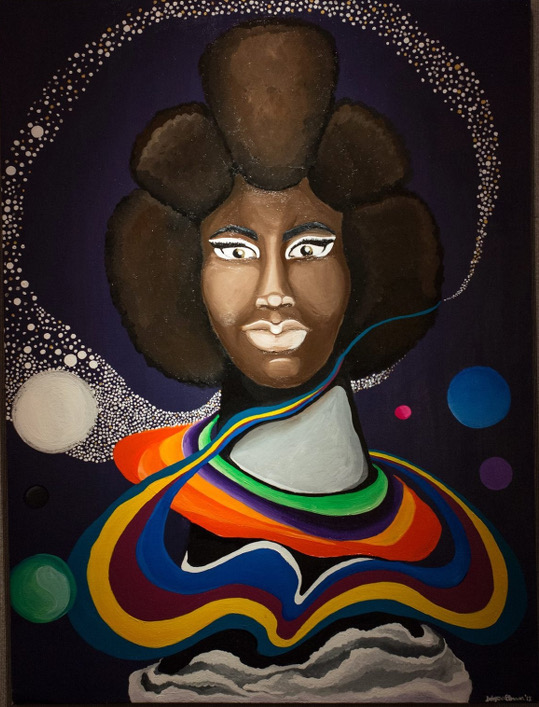 Can you name some events or time periods that have greatly influenced you? Music is also a big part of African-American culture, history, art, and political movements. Do genres like hip-hop also influence your work?

I’m an 80s generation millennial so I love hip-hop, jazz, r&b mostly. The innovative musicality of that time and before it (60s & 70s) has made an impact on me; sometimes my work is attributed to the 80s & 90s time period–through the vibrant colors that are bold, fun, funky, playful or the image itself is hip-hop. I’m all about expressing the subject of music as an energetic, elevated and spiritual activity–hip-hop is meditative; the drumbeat is our groove and our medicine. However, even when I was a child, I was always interested in antiquity, mythology and science-fiction. I don’t have one time period that has influenced me but I particularly admire high points of creativity in civilization, where cultural innovations & an artistic renaissance was happening. I think we are in the midst of one right now…

Do you feel that Afrofuturism is an important part of fostering cultural pride?

In your own words, how do you see the distant future for people of African descent?

The future I see and believe in is one of infinite love, peace and prosperity. To get there we’ve got massive cleaning up to do–in society and for humanity. And it’s going to be a whole lot of ugly happening before we see the beautiful side. I’m hoping my art will remind people of that beauty–the higher ideal of our spiritual selves and culture while African-Americans and all of humanity face-off with the things that hurt or make us angered.

It’s all about getting to that place of harmony. This place has got to work for everyone who calls Earth home.

“It was a significant milestone for me as my first university-level solo exhibit in an art gallery,” Brown says.

Brown also says that she is working to expand on the narrative that was presented in (N)EON, so we’ll definitely be seeing more from this artist in the near future.