Issa Rae Teams Up With ‘Make It Work’ Campaign to Address the Gender Pay Gap. 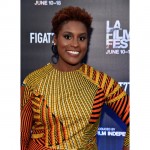 Comedian Issa Rae has always been candid about her struggles as an actress and indie filmmaker trying to bring her stories to the mainstream. And while her meteoric rise from YouTube star to HBO star is definitely an inspiration to the many a content creator, like many women, Rae had to fight income inequality.

The “Misadventures of Awkward Black Girl” creator recently penned an essay about fighting for her worth as a videographer and editor. She addressed the common notion that women don’t negotiate enough.

In my career, I’ve tried to use negotiation to ensure I’m being paid fairly. As a freelance videographer and editor, I constantly had to set my price points, which was hard in the beginning because I honestly didn’t know my worth. In addition to that, I was so eager to work that I was pretty much willing to work for any price point. As I grew more confident in my work, I began to set my prices higher. Sometimes I’d get resistance and sometimes I wouldn’t get the job at all. I’d often have to convince them that I was worth the money.

Something needs to change. And smarter negotiating isn’t enough, because the pay gap isn’t my fault or any woman’s fault. And it can’t just be on women to fix this problem. There is a role for employers and elected officials here, too.

Rae, who has teamed up with the Make it Work Campaign to help spread awareness about , also produced a short video for the project. The short video, which stars Anika Noni Rose, addresses the gender wage gap in a humorous, but informative way.