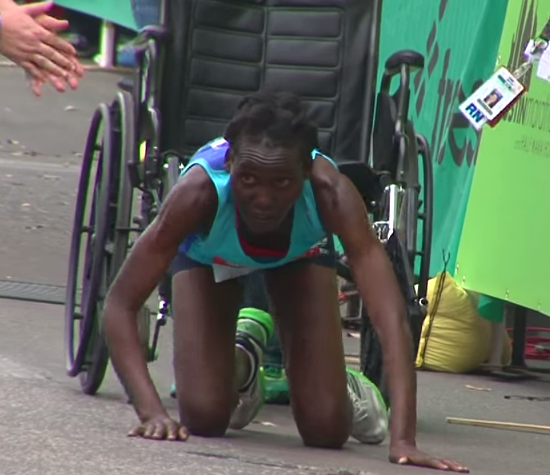 After securing a lead roughly 23 miles into the Austin Marathon Kenyan elite runner Hyvon Ngetich suddenly collapsed. The 29-year-old star athlete refused medical attention and instead decided to literally crawl on her hands and knees to complete the race. With medical attendants in tow and a volunteer pushing a wheelchair behind her, Ngetich finished third in the race. When interviewed by Austin CBS affiliate KEYE-TV, Ngetich said she could not even remember the last 2 kilometers of the race.


Race director John Conley announced that Ngetich would be receiving the same prize amount as second place runners receive, for her amazing efforts.

Ngetich also holds a record of 2:34:42 in the Austin Marathon. Watch her shocking finish below.