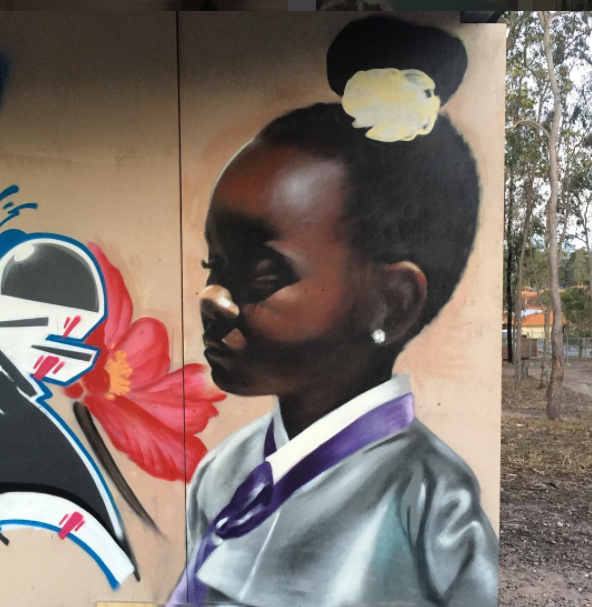 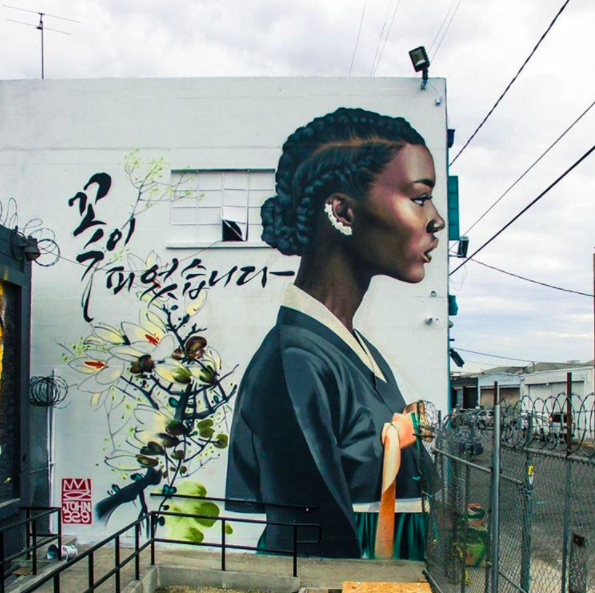 Shim, 27, originally hailing from Seoul, South Korea, is one of thousands of graffiti artists using social media to share his work with the international arts community and to spread positivity. He decided to feature black women in his work after he was selected to paint a wall inside The Container Yard, an arts venue in Los Angeles, California. Images from Shim’s series also appear on walls in San Francisco and Seoul.

Shim wanted to incorporate his culture into his art, while encouraging diversity and cultural exchange. His murals feature images of black women and girls with different looks and natural hair, all wearing traditional Korean dress. The women are depicted wearing Hanbok, a traditional Korean garment that dates back several centuries. Nowadays Hanbok are worn during special occasions, such as weddings and holidays like Chuseok — which is often called “Korean Thanksgiving.” A “Hanbok Day” was also established by the South Korean Ministry of Culture, Sports and Tourism in 1996 in order to encourage South Korean citizens to wear hanbok.

“Hanbok is something real that I could give away to people as a Korean,” says Shim. “I’m happy to paint my culture, I’m happy to see the people happy with the gift.”

Shim’s murals often feature uplifting messages the flame paint in Korean for viewers to read, enjoy, and be inspired by. One mural reads: “a flower has bloomed,” another reads “you will be a blessing,” and another reads “Peace I leave with you, my peace I give you.”

In a short video that centers around his work, Shim reveals that he is moved by the strength of black women.

“There is a black woman in Korean traditional dress and there’s flowers and trees and letters,” he says. “And the letter says, ‘Every flower should be shaken before coming out.’ In order to be successful you have to go through all the sufferings and tough stuff.”

Images of Shim’s murals of black women have gone viral multiple times since he first shared them over a year ago. And Shim, who is currently back in South Korea, continues to post pictures of new works. In addition to painting murals in the United States and South Korea, he has painted walls using the best graffiti markers in several European and Asian countries. 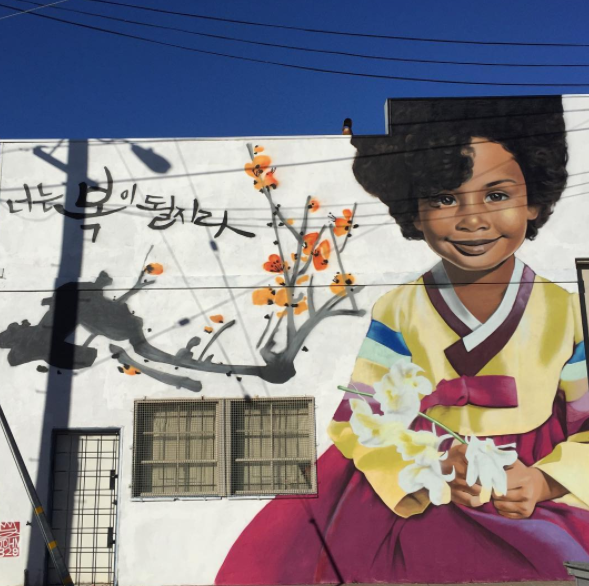 Shim is also a lover of Hip-hop and he has even painted murals of legendary rappers like Christopher Wallace, aka Biggie, and Tupac Shakur.