Laverne Cox Will be The First Transgender Figure at Madame Tussauds Wax Museum. 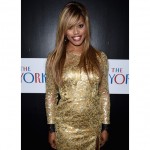 A wax statue made in your likeness at Madame Tussauds famed Wax Museum is definitely proof that you’ve “made it” in Hollywood. The popular tourist attraction announced on Monday, that it will debut a wax figure of Orange Is the New Black star Laverne Cox.


The news comes just in time for what has been a pretty busy pride month for the actress. Cox, who recently penned a short essay in support of Caitlyn Jenner, has been doing a lot of press with her OITNB castmembers in anticipation of the show’s upcoming season premiere.

Orange Is the New Black premieres on Netflix on June 12th.