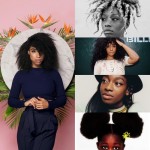 We have an eclectic range of tracks for you to feast on. The latest visuals from the seductively soulful Lianne La Havas, a fresh track from a hard-hitting MC, and uplifting and lush tracks from Goldlink, just to name a few.

An intimate production; much like La Havas’ most recent visuals.

The latest among a series of new work. To go along with the track, the rapper wrote:
“This year has been really crazy so far. I released my debut album + I’m just about to fly to South Africa to perform for the first time and shoot my next video. And this wouldn’t have been possible without you guys. So before I jump on this plane I just wanted to share something new with you guys. Me and my boy Hit-Boy linked up in LA this summer and cooked up a little something. So here you go. Oh… And Drop 5 is coming.”

The TDE songstress moans over a slow-burning track alongside the “Cha Cha” singer, D.R.A.M.

An ode to our dark-skinned sistas and a love celebratory track.

Keke Palmer – “I Don’t Belong To You”

The former child star is giving us sexy grown woman vibe in the black and white video.

Listen to the forty-two-minute mash-up from start to end.

Kona is an Atlanta-based singer who’s keep things on the music scene young and fresh.

The distinctive lyricist returns with another melodious, smooth, and heavy-hitting track.