On Hypervisibility. Black Women Have Always Been on ‘Saturday Night Live.’

After nearly 10 years of playing black women, Kenan Thompson recently announced he will be hanging up his dress dresses and pantsuits for good. Naturally, upon hearing this news, it suddenly occurred to the media that ‘Saturday Night Live’ hasn’t had a black woman on its cast since Maya Rudolph left in 2007. ‘Saturday Night Live’, a show that lampoons popular culture with a mix of comedic cliché, irony and occasionally acerbic wit, somehow managed to go years regularly airing sketches featuring impressions of President Obama but no Michelle Obama and Jay Z but no Beyonce. There have been sketches mocking Claire Danes’ crying face on ‘Homeland’ but, up until this past weekend, Kerry Washington’s lip quivers on ‘Scandal’ remained untouched. Both shows are set against the backdrop of politics, but the latter receives nearly quadruple the ratings of the former and airs on primetime network television, while the other airs on cable.


Somehow, though, even with a complete lack of a black female castmembers, ‘Saturday Night Live’ managed to include Maya Angelou, Wanda Sykes, Oprah, Whoopi Goldberg, Quvenzhané Wallis, Raven Simone and many others in its sketches. The message was loud and clear, if you are a black woman who is fat, old, dark or muscular, you will be played by a black man in drag. And if you are a black woman who doesn’t exemplify any of these characteristics, SNL will quietly pretend you don’t exist no matter how famous you are, unless Maya Rudolph is guest starring. Playing up certain stereotypes while ignoring other representations is a form of hypervisibility. Since black women are hypervisible in popular culture, it’s logical that they would be hypervisible on SNL, a show that lampoons popular culture. But since the mammies and sassy ladies of popular culture are played by actual black women, the next logical step to derision and mockery is to have these types of black women played by a man in a dress. It’s the final step to fully stripping away any semblance of femininity. How else would you mock a mockery?

The hope that adding a black female castmember will correct hypervisibility or give black women agency over their representation on ‘Saturday Night Live’ is nothing more than wishful thinking. As a new castmember, the black female player would have less power over the sketches she appears in and like many other new castmembers, she might go weeks at a time barely being featured in any sketches at all. And this poor woman would have to endure all of this while facing scrutiny as THE black female castmember. The simple fact that the most recent black female guests stars, Gabourey Sidibe, Nicki Minaj and Kerry Washington have all played tired black lady tropes should serve as a portent of what’s to come if ‘Saturday Night Live’ were to add a black woman to its cast. Unlike some writers, I don’t feel the solution to this is to hire more than one black woman. The outcome of that would be that the sketches featuring these imagined castmembers would be twice as sassy. 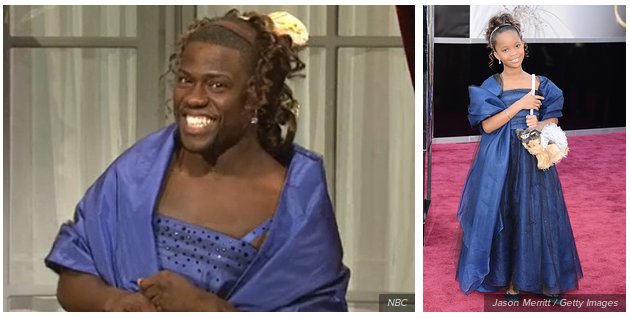 And even though Kenan Thompson won’t be donning a cute frock complete with purse and sensible shoes ever again, this doesn’t mean that SNL guest stars won’t. Kevin Hart recently played Quvenzhané Wallis and cluelessly responded to criticism of his impression by stating in an interview with HelloBeautiful:

“I thought it was funny. No one made me do anything. I never do anything that I don’t want to do. It was funny. It was current and the girl Quvenzhane was funny. People who feed into the Black man getting emasculated by wearing dresses are stuck in a world where you’re never going to evolve. No matter what, people grow. If you chose not to grow, you’re staying in a small box with a small mindset. People who win, go outside of that box. It’s very simple when you look at it.”

Yep, it’s a coincidence the short black male guest star was chosen to play a child that had been stereotyped as sassy and conceited and called a “cunt” by super sarcastic humor rag “The Onion”.

The idea that inclusion and representation can fight hypervisibility is one that has been proven false time and time again through the myriad of stereotypical and token black characters that still show up on television shows and movies on pretty much every channel. The main reason being that the actors playing these roles have little control over them. Essentially, mere inclusion can’t correct hypervisibility because representation is institutional. This “fight” to bring black woman to ‘Saturday Night Live’ isn’t really a fight at all, as the other side is too powerful to even need to fight. The “joke” on the screen during the cold open of this past weekends episode which Kerry Washington hosted proved just that. 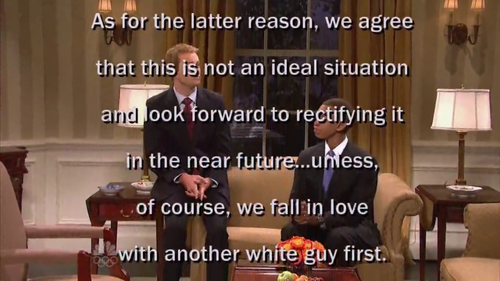