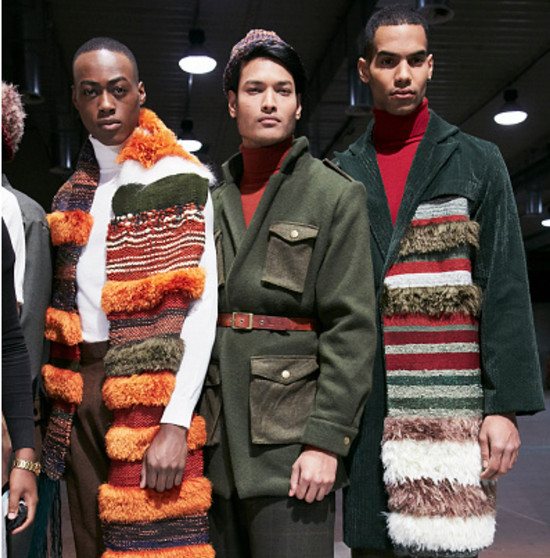 A recent show at Florence’s prestigious Pitti Uomo exhibition made a bold statement about Europe’s ongoing migrant crisis via its casting choices. Aylum seekers from Gambia and Mali strutted down the runway during the “Generation Africa” special event during the ITC Ethical Fashion Initiative in Florence, on January 14, 2016.

The initiative is part of founder Simone Cipriani’s efforts to educate migrants in the ways of Italy’s illustrious fashion industry in hopes of empowering them. The project is also part of a larger program created to raise national awareness about the plight of refugees.

“We are setting up a training centre for refugees and migrants in Italy to work in the industry of fashion and be enabled to go back home and set up their own businesses there,” Cipriani tells AFP.

The men chosen to walk the show at the exhibition, alongside professional models, were also featured in a photoshoot.

Nigerian designer Wale Oyejide of the brand Ikire Jones, spoke out in support of the asylum-seeking models and expounded on the transformative nature of fashion.

“Clothing is just a vehicle, I’m much more interested in discussing these issues… of migration, of borders being crossed,” Oyejide says. “If I take an asylum seeker and put them in a suit, people perceive them in a certain way, which hopefully allows them to think of them as an equal human being, not as someones less than them.”

According to Lai-momo, an organization that provides assistance for migrants, the 3 models, whose names were not released for safety reasons, are between the ages of 19 and 27. They have been in Europe since May of last year, and are currently undergoing the application process for asylum.

In 2015, approximately 140,000 asylum seekers arrived in Italy. The migrant crisis in Italy made headlines last spring, following news that over 700 migrants had died in transit to Europe.