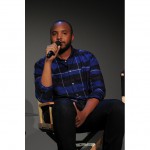 After 2 years of online buzz and crowd-sourcing, it’s finally almost here. “Dear White People“, the hotly debated and anticipated film about “being a black face in a white place” premieres this weekend. Many are hoping that the film will open a new type of dialogue about race in America. But, it’s important to keep the conversation going and a television show might be just what’s needed.


In an interview with The Hollywood Reporter, director Justin Simien hinted that television might be his next big endeavor.

What’s next for you, and where do you see your career going as the film rolls out nationally?
I really believe that there is life in these characters, and I think that perhaps in another medium it would be very exciting to continue their stories and to follow their journeys. I think all the things that the world of Dear White People wanted to say lends itself to television, and I’m very excited about figuring that out.

It was announced over the summer that Lena Waithe, one the writer/producers of “Dear White People”, inked a deal with BET for a pilot based on her YouTube series “Twenties”. With stations like BET and TV One offering fresh, new programming and shows like “Black’ish” making a splash on primetime network television, we might be seeing “Dear White People” on the small screen in the near future.