Red Carpet Round Up. The 2015 Billboard Music Awards. 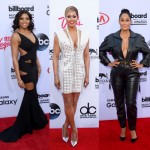 While the 2015 Billboard Music Awards were pretty lackluster overall, there were some great looks on the red carpet. Jourdan Dunn, made an appearance alongside Balmain creative director Olivier Rousteing and Kendall Jenner; both models premiered pieces from the upcoming H&M Balmain collaboration which Rousteing recently announced. Nicki Minaj hit the stage for an upbeat performance of her dance pop hit “The Night is Still Young,” as well as her David Guetta collaboration track “Mama.” While John Legend snagged a “Top Radio Song” win for “All of Me” and Pharrell won for “Top R&B Artist” and his album G I R L was crown “Top R&B album.”