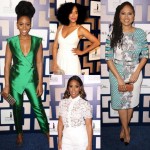 The eighth annual Black Women in Hollywood luncheon, held by Essence magazine was a star studded event and a shining beacon of light during a rather lackluster awards season, that has been severely lacking in diversity.


Honorees included the cast of Orange is the New Black, and Gugu Mbatha-Raw, who accepted the award for “Breakthrough of the Year.” During her acceptance speech, Mbatha-Raw spoke of her identity as a biracial women and as a black British woman.

I feel so supported and so privileged and also I feel responsibility on my shoulders, but it’s wonderful because for me, I’m not African-American, I’m British. … I am both black and white at the same time, which for me has been a journey. I always thought ‘black women in Hollywood? I don’t know — do I even qualify to be here?

Earlier in the evening, she also ran into Kelly Rowland while speaking to the press, Rowland gushed about the rising star.

The entire luncheon will air on television for the first time ever, this Saturday on the OWN network, check your local listings.

Despite frigid temperatures all over the country, stars were definitely ready for spring in bring colors, all-white looks, and lots of floral prints.