Reviews. “Beauty is…”. The Must See Documentary About Black Beauty. 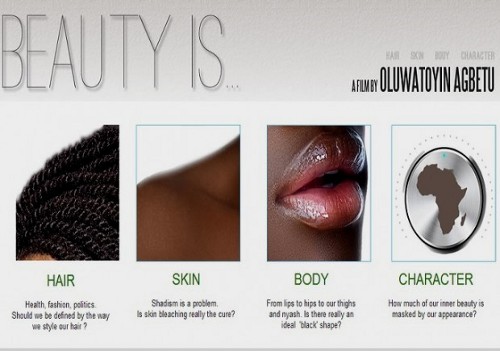 From the beginning until the end, “Beauty is…” tackles the issue of how society views black beauty with no holds barred. From a screen shot of a google search for the word “beauty” we see images of mainly Caucasian women, no brown skinned women in sight. But who is to blame? Quite refreshingly the film does not immediately blame “The White Man” in fact it looks at how the black community itself defines beauty and defines themselves.


We hear about the experience of a Somali woman who is regularly labelled as “not being black or really African” because her hair is too manageable, her skin lighter than the average African. We meet a woman living with Alopecia and another with Vitiligo and how they both view beauty. For one hair had always been associated with beauty and so despite the unconditional love of her family and clear love of her husband still questioned her own attractiveness, whilst for the other losing her dark skin was like losing part of herself. Ironically she had experienced instances where women would ask which bleaching cream she used to get that perfect light shade. That anecdote was just one of the ways in which “Beauty is…” successfully addressed how society and the black community itself views beauty and the impact of shadism. With soundbites and interviews from a variety of people including artist, Emerzy Corbin, and British Rapper/Poet, Akala the film went a long way in looking at how we define beauty. British actress Judith Jacobs recounted situation of her daughter deciding to straighten her hair and wear a weave despite growing up in quite an afro-centric household.

The issue of how the media portrays beauty and the power it has outside the home is tackled well in the film. I particularly liked the way in which Toyin Agbetu (Director) sought out professional voices; pharmacists, dermatologists as well as trading standards officers to further highlight serious issues such as Skin bleaching and chemical relaxing. Hair was a central theme in the film, as so much that surrounds the idea of beauty seems to start with the hair as the foundation. The natural hair “movement” was of course addressed as well as how men view women’s hair. Amusingly many black men stated that they preferred women with natural hair, no weave and surprisingly no relaxer for some either.

I could probably write about this film for too long, and end up with an essay as opposed to a review but in summary I would definitely recommend the film! The multi-faceted approach with its production means that it is easy to watch but not so easy that it becomes “simplisitic”, it handles the vicissitudes of how beauty is defined cross culturally and across genders powerfully and provocatively.

Note: “Beauty Is…” premiered in London this past weekend, additional screening dates and locations are still pending. For more information and updates, visit “Beauty…Is” online.