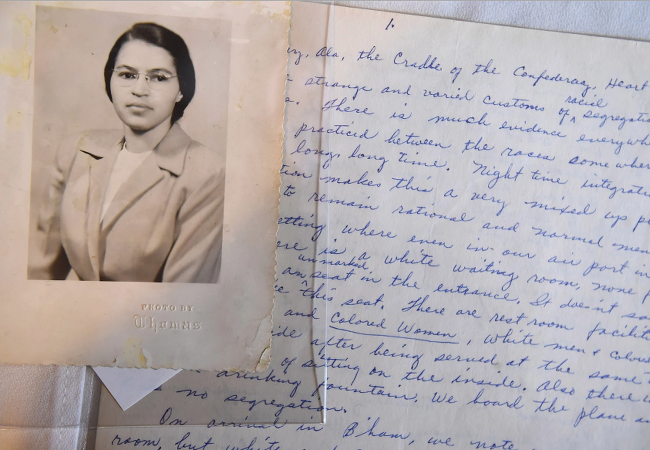 The Rosa Parks Collection at the Library of Congress opens to researchers to day on what would have been the Civil Rights activist’s 102nd birthday.


The collection is at the library on a 10-year loan from philanthropist Howard G. Buffett. Buffett purchased the collection for $4.5 million this past August of 2014, following a legal dispute between Parks’ heirs and the Rosa and Raymond Parks Institute for Self-Development

The collection, which contains approximately 7,500 manuscripts and 2,500 photographs, offers a rare, never-before-seen glimpse into the life of Rosa Parks. Included in the collection, are rare photographs of Parks with Stokely Carmichael and Shirley Chisholm, and personal letters and postcards from Dr. Martin Luther King, Jr. And while Rosa Parks is best known for refusing to give up her seat on a public bus to a white passenger in 1955, the archive reveals the intimate details of her lifelong commitment to civil rights, which began when she was quite young. In one of the letters included in the collection, Parks speaks of the severe toll that her arrest took on her.

“Time begins the healing process of wounds cut deeply by oppression. We soothe ourselves with the salve of attempted indifference, accepting the false pattern set up by the horrible restriction of Jim Crow laws. Let us look at Jim Crow for the criminal he is and what he has done to one life multiplied millions of times over these United States and the world. He walks us on a tightrope from birth.”

“I want to feel the nearness of something secure. It is such a lonely, lost feeling that I am cut off from life. I am nothing. I belong nowhere and to no one. There is just so much hurt, disappointment and oppression one can take. The bubble of life grows larger. The line between reason and madness grows thinner.”

Curators hope to create a digital version of Rosa Parks’ archive in the future, part of the archive will be available for viewing online at the Library of Congress at from March 2 through March 30, 2015.

Rosa Parks’ Early Activism Will be Highlighted in a New Film Directed by Julie Dash.

At 83, Carmen de Lavallade Is A Timeless Beauty.