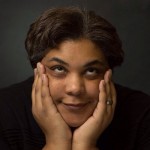 Bad Feminist author Roxane Gay has parted ways with her publisher,TED Books, an imprint of Simon & Schuster, in a stand against the company’s deal with a known racist harasser.

News that Breitbart editor Milo Yiannopoulos had scored a $250,000 book deal with Simon & Schuster sparked a heated debate in the literary community. While some readers called for a boycott and others debated the merits of such an action, many notable authors spoke out.

Yiannopoulos made national headlines after he lead a racist harassment campaign against Saturday Night Live cast member Leslie Jones, back in July of 2015. He was banned from the platform, but many of his supporters continued to harass Jones. Jones, understandably, called out Simon & Schuster when news of the deal first broke, last month.

This morning, in a statement, Roxane Gay announced that she had pulled her book, How To Be Heard, from the publisher. Gay said that she “couldn’t bring herself” to turn in a manuscript for the upcoming release, knowing that she shared a publisher with Yiannopoulos.

“I was supposed to turn the book in this month and I kept thinking about how egregious it is to give someone like Milo a platform for his blunt, inelegant hate and provocation,” she said.

Gay followed up her statement on Twitter, tweeting: “I guess the news out. Everything I need to say is in my statement. I can afford to take this stand. Not everyone can. Remember that.”

How To Be Heard doesn’t have a new publisher, yet, but Gay concluded her statement by saying that she hopes the book will be published, “someday.”