Sneak Peek. Black-ish Takes It Back To The1920’s With A Star-Studded Season Finale. 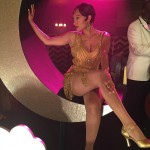 The cast of ABC’s Black-ish is traveling back in time to the 1920’s to find their roots in the show’s season finale, titled “Pops’ Pops’ Pops.” When Jack and Diane (Miles Brown, Marsai Martin) have to find their family history for class project, Pops steps in to help by telling them a compelling story about their great-great grandfather, Drexler Johnson.