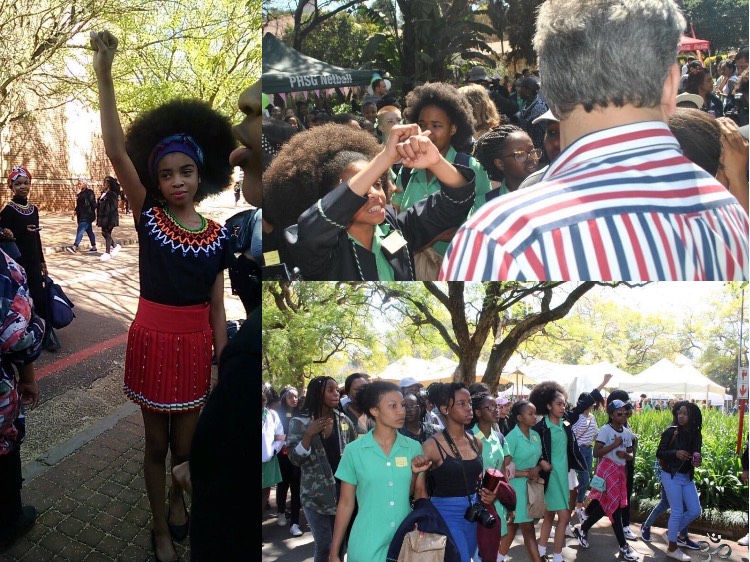 Over the weekend, black students from South Africa’s Pretoria High School for Girls took a powerful stand during the school’s annual Spring Fair. They held a peaceful march to protest the school’s hair policy, which severely restricts how black students can wear their hair, and essentially polices their natural features. They held the protest until parents and administrators threatened to call the police on the young girls protesting.

While Pretoria High School for Girls’ official handbook don’t explicitly restrict natural hairstyles and related protective styles, the policies in place do state that braids cannot be thicker than 10mm or .39 inches and must be neatly tied back. The handbook also states that “Singles/braids must be the same length and be the natural colour of the girl’s hair. Longer braids must be tied back.”

Despite the lack of an explicit ban, several students claim that they had been told to straighten their hair by teachers, or that their natural hair appeared “untidy.” Other students alleged that they were referred to as “monkeys” when speaking in their native tongue.

“She said my hair looks like a bird’s nest. She said my hair was untidy but I take time every morning to make up my hair. I do not see anything wrong with my hair,” said one student.

On Monday, the students took to social media, and #StopRacismAtPretoriaGirlsHigh began trending on twitter. Images and video from the protests were also shared, receiving thousands of likes and retweets.

Singing continues outside as MEC for education Panyaza Lesufi holds a meeting inside #StopRacismAtPretoriaGirlsHigh pic.twitter.com/o1LZ9L4Kvh