Tamron Hall Tapped to Replace Bill Cosby on Board of Trustees at Temple University. 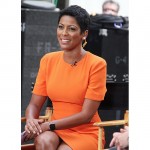 NBC News anchor and correspondent Tamron Hall has been tapped to fill Bill Cosby’s now vacant seat on the board of trustees at Temple University. Hall, a 1992 Temple alumna, earned her bachelor’s degree in broadcast journalism from the institution. She will become the fourth woman on the university’s 36-member board.

The 45-year old anchor, who originally hails from Texas, has always been passionate in her support of Temple and the city of Philadelphia. In December of last year, she delivered a commencement address to Temple’s School of Media and Communications.

“I’m the girl who came to Temple never having seen Philadelphia,” said Hall, who stars on the current cover of Temple Magazine. “This city gave me my soul. This university gave me my confidence.”

While an official vote will take place Tuesday, Patrick O’Connor, chairman of the Temple University board of trustees, has already confirmed Hall’s appointment to the press.

“We went up [to New York] and had lunch with her. She blew my socks off,” O’Connor told the Philadelphia Tribune. “She’s a home run for us. . . . She’s an exciting, vibrant, loyal alum. She’ll add a new dimension to our board.”