The Limits of Privilege and Why a Black ‘Daria’ Wouldn’t Work Anyway. 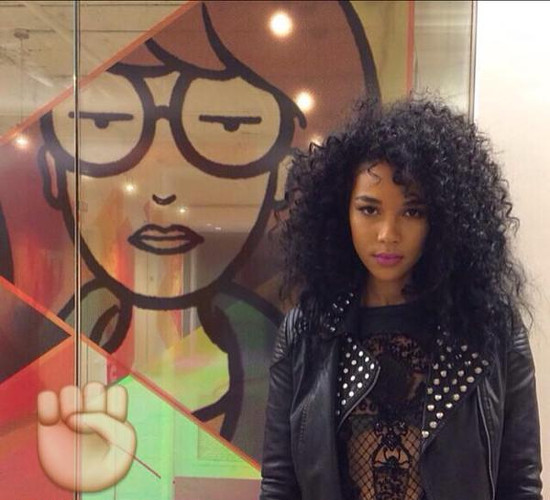 Over the weekend, Twitter user @Tahoe17 decided to have a little fun trolling by starting the rumor that MTV had green-lit a live-action film version of the late 90’s animated hit Daria, starring a black actress, Alexandra Shipp. It didn’t take long before the rumor hit Tumblr, and quickly amassed over 25,000 notes. The Daria hoax was soon picked up by popular blogs, and twitter accounts, some even claiming the story was confirmed by MTV. Thousands of excited black girls eagerly shared the story on their social media accounts.

Daria Morgendorffer was a pretty important character to many a child of the 90’s and early aughts. She was self-aware, cynical, and critical of the world around her and the adults in it. But, she was still a privileged, white teenager who had spent the majority of her life around people who were just like her. She and her classmates were all quite wealthy. The tony community of Lawndale seemed to be an endless sea of “McMansions,” gated communities, and even bigger mansions. While she was sharp and knowledgeable, the general aloofness and apathy exhibited by Daria as well as by her best friend Jane Lane was an indication of their privilege. They could afford to simply not give a shit, and not be judged on the basis of their race or ethnicity. They could afford to talk back to adults, and throw around sarcastic quips without being accused of being sassy or “having an attitude problem.” And even moments when either Daria or Jane might have taken their tendency to challenge authority a bit too far, they were still seen as merely “troubled,” as opposed to wild or undisciplined. Remember — in the first episode Daria meets Jane after being forced to attend a workshop on self-esteem in school. Both characters end up in the workshop due to their behavior. While most kids, especially young black children might have been sent to detention, Daria and Jane are sent to therapy.

Throughout the series, other characters would show up and act as a foil of sorts to Daria, causing her to rethink or reframe her general cynicism. In “Aunt Nauseam,” the tenth episode of the fifth season of Daria, we meet Daria’s Aunt Amy. Amy is the younger sister Daria’s type-A mother Helen, and the youngest of 3 sisters. She bears a physical resemblance to Daria and talks in a similar apathetic tone. Unlike Daria, however, she’s a self-sufficient adult. Amy’s lifestyle and her interaction with her sisters give Daria a glimpse into her future, but also make it clear that Daria’s often bleak worldview is taking place in limited environment. Aunt Amy also provides Daria with proof, that people like her can exist — on their own terms, in a world people filled with people like her mother, and her superficial sister Quinn.

Then there’s Jodie Landon. Jodie and her boyfriend Mack were the only black characters in the show’s main cast. While she wasn’t regularly featured in the series, Jodie received quite a few meaningful storylines; she was definitely more than a token character. When Daria and Jodie interact, it’s clear that the two aren’t good friends, but the mutual respect they have for one another is apparent. In Season 2, Episode 8 of Daria, Daria and Jodie end up together after being invited to visit Grove Hills, a specialized school for gifted students. In this episode, Jodie delivers her famous, often quoted line, which sums up the pressures of being the only black face in white space.

In season 4, episode 1 of the series “Partner’s Complaint,” Daria and Jodie are partnered up for a school project. Here we see the two characters in a disagreement. Feeling rejected when seeking a bank loan for their project, on the basis of her age and race, Jodie decides to name-drop her powerful father, which helps them secure a loan. Daria opposes the methods that Jodie uses to get ahead on principle, essentially taking a more idealist view, Jodie in this instance is the cynical one. Despite her star student status, and her generally amicable and seemingly positive personality, Jodie might be the only student at Lawndale High that is more cynical than Daria. Her cynicism is just hidden because it has to be, and unlike Daria, Jodie’s cynicism is not based mostly on astute observations, but on lived experiences. At the end of the series, despite her parent’s opposition, Jodie decides to attend an HBCU for a year, before transferring to a more prestigious, predominately white institution.

The “black Daria” rumor is another example of the limits of race-bending. While I understand the desire to see quirky, irreverent, complicated black characters who are more than their hardships, I don’t think “black Daria” could actually work without drastically changing both the series and the character. In order for such a casting to actually work, there’s a chance that “black Daria” might actually end up being a little too cynical for mainstream viewership.