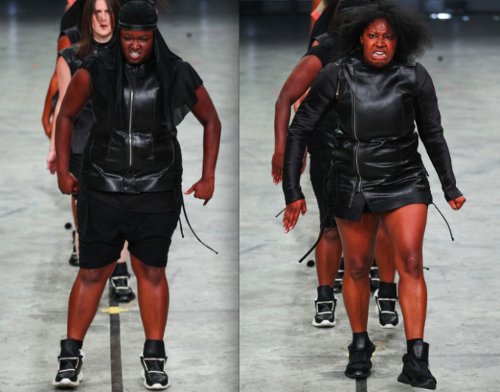 While I am a huge fan of Rick Owens and his design aesthetic, I don’t think I can blindly champion the use of larger bodied steppers, complete with grit face, instead of models, as “true diversity”. The only way you can do such a thing is to feign ignorance of the politics of the black female body and the ‘cult of skinny’ mentality that often pervades the fashion industry behind the scenes. You would have to believe the insulting idea that a larger black woman is the “opposite” of beautiful or conventional beauty. You would have to believe the even more insulting idea that such a woman “doesn’t care” about being beautiful or is “above” beauty standards somehow. And let’s not forget that good old “angry black woman stereotype”.


It’s also very odd to me, how the casting of this particular show was almost presented as the pinnacle of diversity. It felt like many were essentially saying: “Our work here is done folks, we’ve traveled to the last frontier, fat, black women”. After seeing the show and consuming the media surrounding it, I was left feeling hollow. It was the same feeling I had when I thumbed through my “all black” issue of Vogue Italia in 2008. The models and the editorials were there, but the ads in the magazine were still whiter than a polar bear in a snowstorm. Diversity isn’t merely inclusion, it’s integration. Defying beauty standards isn’t about rejecting them or presenting opposites, it’s about redefining them.

For more dissenting opinions, visit Africa is a Country and Hint Mag.