Tomb of Marie Laveau Restored in Time For Halloween. 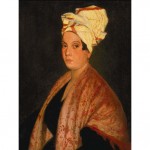 (Image: Portrait of Marie Laveau by Frank Schneider via Wikipedia.)

Like many people, you might have first become familiar with Marie Laveau through the thrilling FX series “American Horror Story.” To natives of New Orleans, however, Marie Laveau is an important part of the city’s heritage, and major figure in it’s local lore.


Laveau was born a free woman in New Orlean’s French Quarter, around 1801, to creole and biracial parents. Public records indicate she married Jacques Paris, a Haitian man who immigrated to the city after the after the Haitian Revolution of 1791-1804.

Laveau has often been referred to as a “Voodoo Queen”, but she was also known as a follower of Roman Catholicism, a multifaceted religious identity that is common throughout the African diaspora.

Laveau passed away, quietly in her home in 1881. Her tomb, which is located in New Orleans, is a popular tourist destination. According to a legend started decades after her death, if you draw an “X” on Marie Laveau’s tomb, turn around three times, kick the tomb, and then yell out whatever you desire, her spirit will grant you a wish. As a result of this legend, up until recently, the tomb was in serious disrepair, covered in “X’s”, and at one point it was even painted pink by a mystery vandal.

According to Al Jazeera America, repairs for the tomb were estimated at about $10,000. Save Our Cemeteries has been leading the repair effort, and the tomb has been restored, just in time for Halloween celebrations. Desiree Rogers, former social secretary for President Obama, and current CEO of Johnson Publishing Company, which owns Ebony and Jet magazines, is a distant relative of Laveau. She has also pledged to contribute to the restoration fund.

The newly restored tomb will be officially unveiled today, but tourists have been already flocking to the site since Wednesday.

Ruby Bridges Says America is Just as Segregated Today as It was When She Was a Child.