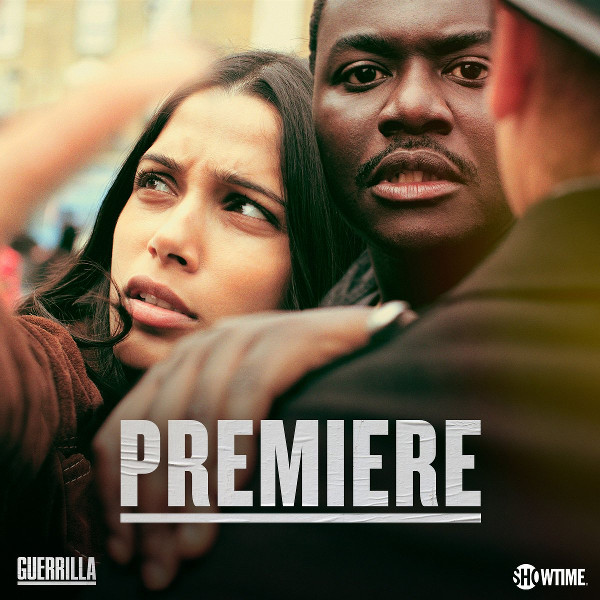 An upcoming series about the fight for Black British liberation is raising a few eyebrows after its trailer dropped. Created by screenwriter John Ridley and produced by Idris Elba, Guerrilla explores the lives of Black radicals in 1970’s London. The six-part limited series, which is set to air on Showtime in the United States, stars Babou Ceesay and Freida Pinto. Ceesay and Pinto play Marcus and Jas, radicals and lovers whose relationship is pushed to the limits, when they liberate a political prisoner. The pair work with an underground organization in order to defeat secret efforts by the British government, aimed at upending Black power movements.

A trailer for Guerrilla prominently features Pinto and Ceesay, as well as other black men actors, but only two black women are briefly present in blink-and-you’ll-miss-it moments. Zawe Ashton and Wunmi Mosaku, both black actresses, are credited to appear in the series. This first look is understandably drawing some sharp criticism.

“This is an insult to the global history of the Black Power Movement. Shit like this would NEVER fly in America, and Black British folks need to boycott this. Idris Elba gets a side eye from me,” reads one comment.

“The casting director couldn’t find any black women to play the role? Won’t be watching,” reads another.

While Guerilla is loosely based on the story of actual British activists Darcus Howe and Farrukh Dhondy, the fictionalized account is still a missed opportunity to highlight the Black women who fought for equality alongside black men. All over the world, black women have played an important part in the fight for equal rights, but are often pushed to the background when it comes to depicting that fight. The choice to make Pinto a star in the series, while black actresses serve as supporting players, also stands as yet another example of how non-black women of color can contribute to the erasure of black women.

Guerilla is set to premiere on April 16th.