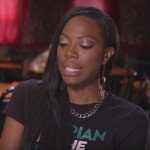 Yvonne Orji is an actress, writer and comedienne who was born in Nigeria, and moved to the United States at the age of 6.

Orji, who recently landed a role as Issa Rae’s best friend on Rae’s upcoming HBO series, is also a writer and standup comedian. Many first become familiar with her work after a trailer for her independently produced web series, First Gen, went viral earlier this year. Tge series is a semi-autobiographical sitcom about a Nigerian-American family that draws from Orji’s own experiences.

Orji recently talked about her experiences growing up as a first generation immigrant, as well the expectations placed upon her.

“There are only five professions you’re allowed to be if you have African immigrant parents: engineer, lawyer, pharmacist, nurse or doctor,” says Orji. “And from the time I was born, I was the good one who was supposed to grow up to be a doctor.”

As for First Gen,, Orji is still confident the project will get made, despite her parent’s disapproval. “They keep asking why I’m so eager to air our family’s dirty laundry!” she says.