Activists Bring #BlackLivesMatter To a Day at the Beach During Memorial Day Weekend. 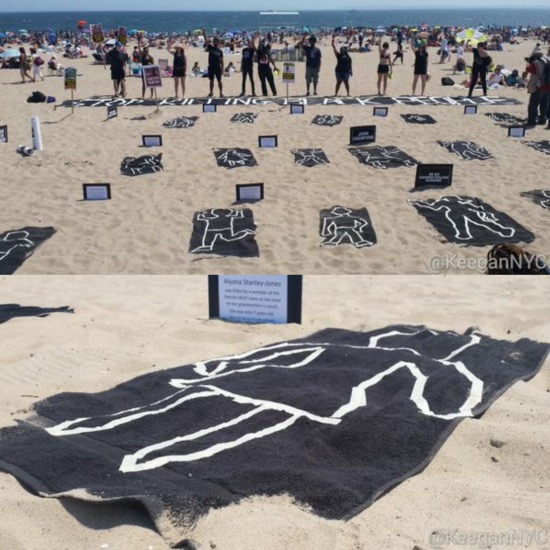 A group of activists gathered at Coney Island in Brooklyn, New York on Monday to speak out against the ongoing epidemic of police brutality. The group, who carried signs and chanted “Black Lives Matter,” along with reading aloud facts about police brutality, also laid down black beach blankets with illustrations meant to depict the familiar white chalk outlines associated with dead bodies at crime scenes. Each blanket had a marker with the name of a black man or woman who had lost their lives to police brutality. The group, who also unfurled a 45-foot long banner along the boardwalk released a statement about the demonstration.

Memorial Day is a holiday to remember those lost in wars waged abroad. Today we disrupt the traditional Memorial Day festivities on Coney Island to draw attention to the countless lives lost at home to the war police wage on communities of color every day.

The systematic murder of our brothers and sisters of color at the hands of the state will no longer be accepted. As of May 23, 2015, 448 people have been killed by police this year. Every 21 hours a Black man, woman, or child is murdered by a police officer, security guard or vigilante. Our demand is simple: Stop Killing Black People.

"No Justice, No Peace! No Racist, Po-lice!" at #MemorialDay for black people killed by cops. Coney Island, NYC. https://t.co/Z1cPaJFBFw