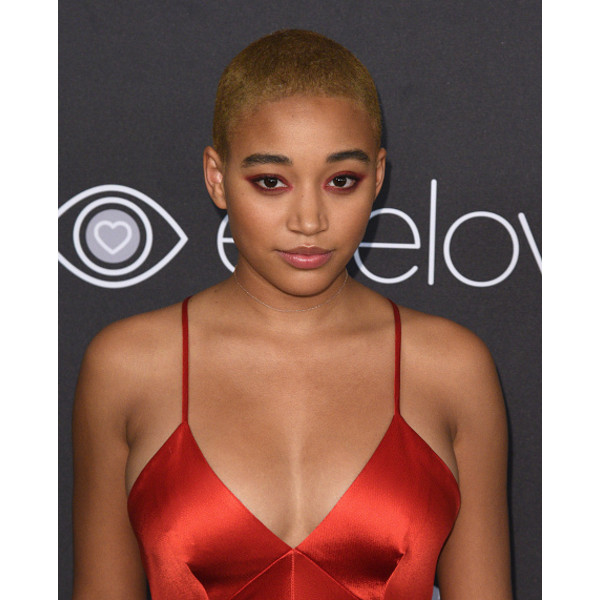 The film, which stars Amandla Stenberg, takes place during the Holocaust. In the past Stenberg has said that Where Hands Touch explores the experience of biracial people during that time. This recently released teaser, however, makes it seem as if the film centers around a romance between Stenberg’s character and a member of Hitler Youth, played by George MacKay, with the Holocaust as a backdrop.

First look at #WhereHandsTouch – a beautiful project I am honored to be a part of directed by @iammaasante. "Fifteen-year-old Leyna (Stenberg), daughter of a white German mother and a black father, meets Lutz (MacKay), the son of a prominent SS officer, and a member of the Hitler Youth. 'They fall helplessly in love, putting their lives at risk as all around them the persecution of Jews and those deemed ‘non-pure’ slowly unfolds." This film isn't simply a love story, but rather a portrayal of human truth in a world of atrocious violence created by a dictator that children are forced to navigate.

Stenberg has taken to both Instagram and Tumblr to defend the project.

“Oversimplifying, assuming, and jumping to conclusions with little to no actual basis or information is doing y’all no favors,” Stenberg wrote on Tumblr. “Righteous problematic labeling contributes nothing to the world and stifles conversations instead of promoting dialogue. How are we supposed to perpetuate change and defend identity – especially when it is needed so badly in today’s political climate – if we are more concerned with declaring our judgements of others in order to affirm our own righteousness? If we are forming our opinions off of rumor, heresay, and perhaps most alarmingly, agreeing with others just to agree and feel a false sense of virtue and satisfaction?”

“In my eyes, the fundamental values of activism are individual thought and in depth analysis. It strikes me as ironic that those who supposedly lead their lives with these values in their hearts are the same to blindly follow like sheep and make hollow preemptive conclusions.”

“Y’all, I’m out here trying to do the work. I’m not your target. The world is much larger than this bubble. If you jump to conclusions and make generalizations about others out of fear, you are doing the same thing as the people you claim to morally oppose.”

Stenberg also posted another still from the film, showing her character in a concentration camp. She included another detailed caption, explaining more about the film.

“This week, a First Look image of Where Hands Touch was released, & it revealed all sorts of fears on what this film will be about. My passion has been to shine a light on the existence of the children of color who were born & raised under Hitler. These children were also persecuted & my wish has been to explore how Black & Bi-racial identity was perceived & experienced under Nazi facist rule. The young girl’s experience in ‘Where Hands Touch,’ sits alongside the Jewish experience & the experience of others who were persecuted. It looks at how Germany became Nazi Germany & 'slept walked’ itself into a disgusting & murderous state that resulted in it killing its own people. Leyna’s story is told in this sad & terrifying context. My reasons for making this film sit around my concerns of the current climate but also a growing intolerance of racial & religious difference. Amandla & I teamed together to make a film that might contribute to the dialogue of how we fight this racial and religious ignorance today, along with the intolerances visited on the many other marginalized groups & intersections. With only a few lines offered to comment on when a First Look image is released, & with Leyna embarking on such large rites of passage, it is difficult to summarize. Amandla’s role in this film brings attention to an, as yet, untold story in the arena of drama cinema, to the existence of the other ‘others’ who suffered during the holocaust. This does not mean that the Jewish experience is not also key to our story. It is. When, as a 17 year old member of the Hitler Youth (compulsory since 1936), George MacKay’s character discovers what his country is & what it stands for through learning what is happening to Jews and then to Leyna as she is thrown into a camp system, he rejects the doctrine & challenges his father’s belief system. I hope that this at least clarifies concerns. I would never make a movie that glorified, glamorized or romanticized hatred & murder in any way. On the contrary, I want to explore the voices of the marginalized. By exploring the experiences of yesterday we can hopefully be better prepared when ugliness heads our way today." – @iammaasante