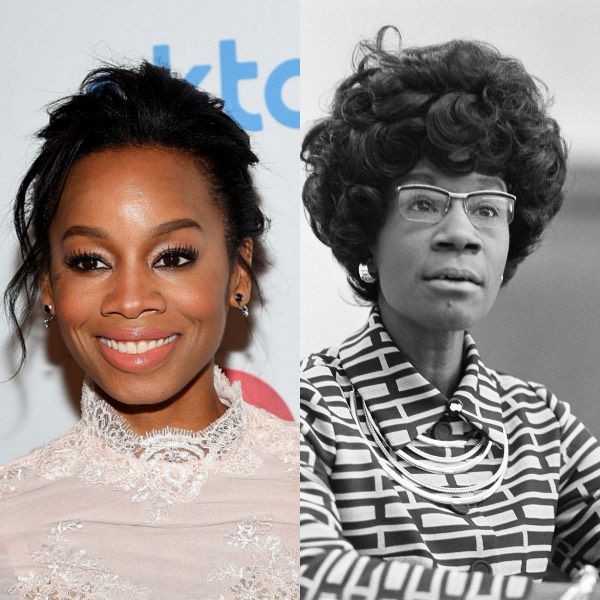 Roots and Dreamgirls star Anika Noni Rose is set to star in CHISHOLM, a Shirley Chisholm film that is currently in development.

The news comes after the historic nomination of Hillary Clinton has sparked a new interest in the barrier-breaking political career of Shirley Chisholm. Chisholm’s name was also widely mentioned in 2008, when Clinton ran against President Barack Obama. Chisholm became the first African-American woman elected to the United States Congress in 1968, and became the first woman to run for president in 1972. She was also the first black candidate to run for president under a major party. While her campaign was underfunded, undermined, and ultimately unsuccessful, she used her platform to make poignant remarks about the intersection of sexism and racism in politics. The legacy of Shirley Chisholm was explored in-depth in the award-winning documentary Chisholm ’72 – Unbought & Unbossed.

Here’s what we can expect from the upcoming film, via Shadow and Act.

Portrayed by Tony Award-Winning Actress, Anika Noni Rose, CHISHOLM embodies the keen sense of justice and community, embracing her fold like a warrior. Always meticulously dressed, pearls in place, watched adjusted to the second, Congresswoman Chisholm metamorphosed to do America’s business. With a colorful team of cohorts by her side, Congresswoman Chisholm personifies the bold educated Brooklynite with her roots firmly planted in her Caribbean heritage, hurdling humongous odds in a system structured for whites and males only. With an efficient producing team, Creative Monster Production’s Bryan Gambogi (‘Blue Jasmine’/’King of Beasts’ Documentary), Grant Anderson (‘Green Hornet’), Debbie Brubaker (‘Big Eyes’), Barbara Bullard, social innovator, and an award-winning writing team, Armistead Johnson and Montserrat Mendez, CHISHOLM will be eloquently developed changing the paradigm of how we ourselves can be a ‘Catalyst for Change.

The project is written by Montserrat Mendez and Armistead Johnson, and produced by Rose alongside Bryan Gambogi and Barbara Bullard. CHISHOLM is one of many attempts to bring the story of Shirley Chisholm to the big screen over the years, reports and rumors have circulated about different Chisholm films, headed by different teams. Regina Washington and Viola Davis were some of the names under consideration for the possible projects.