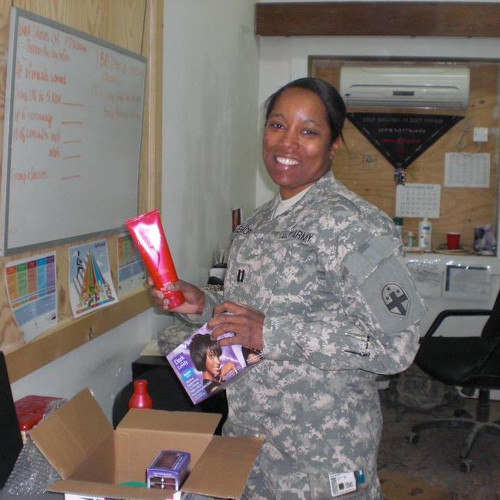 (Image via The Boston Globe.)

Maryline Morris Whitaker is a hotel company manager from Arroyo Grande, California and the founder of The Sister Soldier Project. The project is a grassroots organization that provides haircare products to black women stationed overseas, in order to help them comply with military hair regulations.


Whitaker was first inspired to start the organization after hearing a white soldier recount witnessing her black roommate burning her hair in order to comply with hair policies.

With the help of her bookclub, as well as several black churches and sororities, Whitaker coordinated the sending of over 7,000 care packets with black hair products from 2007 to 2012.

“We sent to Iraq, Afghanistan, Qatar, Kuwait,” she tells The Boston Globe. “We helped Marines, Navy, Air Force, National Guard. Every rank, we were there.”

Over the years, she received an outpouring of thanks from she helped in the form of letter, pictures, notes, and personal accounts.

Soon Whitaker realized that she had a working archive of the lives of African-American women soldiers. Whitaker decided to donate the collection to the Arthur and Elizabeth Schlesinger Library on the History of Women in America at the Radcliffe Institute for Advanced Study at Harvard University. The library is already home to the collections of many notable African-American women, including Mildred Jefferson, the first Black woman graduate of Harvard Medical School, as well as many civil rights activists.

Someone’s going to do research on the Gulf wars and they’re going to be interested in this segment of the population,” Whitaker said of the archive. “These women have made history. Their stories will be told forever. That’s a good thing.”