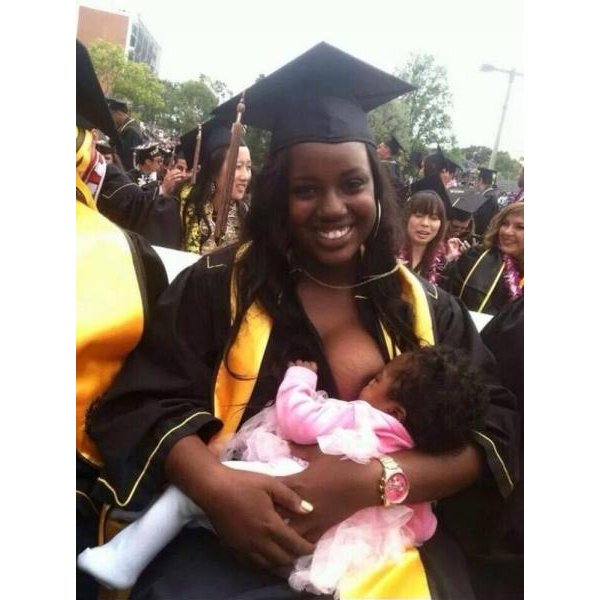 After crossing the stage at California State University, Long Beach on May 22nd, 25 year-old Karlesha Thurman was then photographed for a soon-to-be viral image. When she walked back to her seat, her friends sitting next to her asked to meet her infant daughter, Aaliyah. After retrieving the child from her mother’s arm, Thurman realized little Aaliyah was hungry, so naturally, she breast-fed her. A friend captured the beautiful moment on her camera.


Karlesha recently shared the picture with the facebook group “Black Women Do Breastfeed“, and it quickly went viral. Some have commented in disgust, but many have also commented in support. While Karlesha has since then taken the photo down, she is taking all of the new attention in stride. She has been thanking all her new supporters on her twitter account, joking about the image, and even speaking to the media about the image and the importance of breastfeeding.

Somebody is BREAST MILK WASTED

Breastfeeding is a public health issue, and truly affects the health and quality of life for children all over the world. While the number of black women in America that breastfeed has increased, the numbers still aren’t where they should be.

According to the latest numbers from the Centers for Disease Control and Prevention, breastfeeding rates improved nationwide in 2000-2008, and some of the greatest improvement was among black women. However, only about 59 percent of black mothers breastfed in 2008, compared to 80 percent of Hispanic mothers and about 75 percent of white mothers. For 2008 rates of breastfeeding at a baby’s first birthday, the number was about 23 percent overall but only 12.5 percent for black mothers. That low rate still marks a near doubling of rates among black mothers compared to the year 2000.

This is why images like the one of Karlesha Thurman and little Aaliyah are so powerful, and so necessary.

Watch This. Mom Casually Pole Dances and Strikes a Yoga Pose While Breastfeeding.