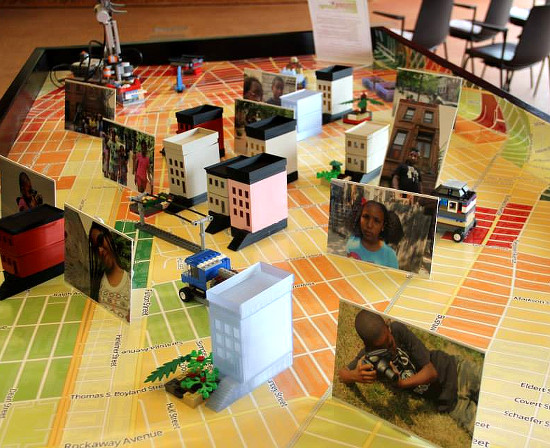 Founded in 2008 by Sha Sha Feng and Clarisa James, the Digital Interactive Visual Arts Sciences (DIVAS) for Social Justice is a Brooklyn-based organization that aims to bridge the digital divide between individuals from different socioeconomic backgrounds through community outreach programs. Feng and James, who have backgrounds in Computer Science and Music, respectively, decided to create the organization after seeing how underrepresented women are in the fields of Technology and New Media.


This past summer DIVAS hosted a day camp at the Weeksville Heritage Center for children aged 7-12. The unique program used 3-D printing technology to help the young campers learn about gentrification.

Many of the participants came from families that are longtime residents of Bed-Stuy. Explains DIVAS director Clarisa James, “We taught them about gentrification—the positives, the negatives—who’s affected, and then we would have an open conversation.” Simultaneously, the campers were trained in technology like robotics and digital media.

The campers also employed a variety of research methods including mapping, photo documentation, and first-hand accounts from residents of the Bed-Stuy section of Brooklyn. The kids incorporated their findings into a 3-D model of the neighborhood, complete with replicas of their buildings. They used the information to determine which neighborhoods were more likely to be altered by gentrification. Projects such as these are especially important for young people in rapidly changing communities like Bed-Stuy, as they will most likely have to deal with the brunt of the displacement occurring in their changing community.

For more information and to support DIVAS visit www.divasforsocialjustice.org.