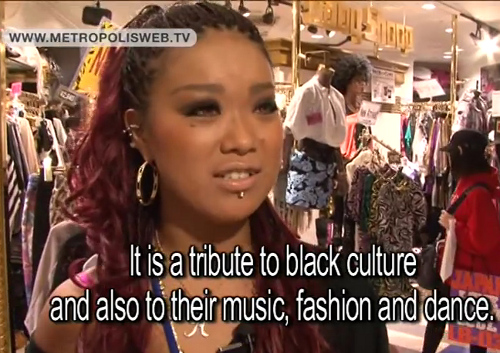 Cultural appropriation is totally a thing. So is blatantly misrepresenting a culture under the guise of “journalism” and investigation. In a recent article by “hipster bible” Vice titled ‘B-stylers’ Are Japanese Teens Who Want to Be Black,” we meet Hina. Hina, is a 23 year-old Japanese “B-Styler” who appeared in a now viral documentary, which has been making the rounds on the Internet for more than two years now. Hina is photographed and interviewed by Dutch photographer Desiré van den Berg, who after seeing the viral video, wanted to see “B-Style” for herself.

I understand the gut reaction to go all Paul Mooney but it’s important to remember the role that supremacy plays, especially in a brief article that describes “B-Style” as “one of Japan’s many weird subcultures.” The short piece makes no mention of Japan’s cultural history, the history of African-Americans and African blacks in Japan or the non-Japanese populations currently living and working in Japan. Instead, we get a simplistic view of Japan’s “race problem” in a western publication written by people who don’t even understand the Japanese language. As writer “Dex,” a black man who speaks Japanese, has lived there and is working on a book about Japan’s racial issues points out:

“My main issue with these pieces is that they let white people focus away from actual problems they have at home, and instead laugh about how Japan is ‘late’ or ‘weird’ because they are ‘still’ doing racist stuff.

Like seriously, Japanese people dressing up in rap gear is only interesting if you are willing to ignore the fact that it happens on a much larger scale in, say, the U.S.”

Articles like these are the equivalent of a street magician waving his right hand to distract you while he holds up the king of hearts you were looking for in his left hand as onlookers chuckle at your obliviousness. But racism is much more complicated than street magic and the nuances of racial relations and cultural interactions are endless. It’s easy to get riled-up and offended at “B-Style” because of its apparent familiarity, but it’s important to realize that cultural appropriation is the side-effect of multiculturalism in the framework of supremacy.

The dominant group decides what aspects of a culture or race are worth recognizing and valuing, usually valuing them over the actual people from said culture or race. The dominant group also centers themselves in a conversation about other cultures and other people. Essentially, Japanese cultural appropriation of Hip-Hop culture is influenced by the appropriation of Hip-Hop by Americans who run culture through filters, essentially distilling it, before exporting it. Considering the origins of Hip-Hop and the massive difference in history and demographics between the U.S. And Japan, it should come as no surprise that young people in Japan like Hina just don’t get it. Hip-Hop is known as the medium of the disenfranchised but it’s filtered, commodified, packed up and exported by the wealthy and things get lost in translation.

Speaking of translation, “Dex” the black writer who lived in Japan and speaks Japanese, also points out the fact that he can’t even find the term “B-Style”, a term we are told in the Vice article as well as the viral online video, is short hand for “Black Style” in Japanese, when searching for it online in Japanese.

I don’t hate Vice, but I know its not derisively referred to as a “hipster bible” for nothing. Ironic, considering so much of contemporary “hipster’ culture feeds off of the cultural appropriation of Hip-Hop.

This appropriation usually works in tandem with a level of arrogance that adopts certain aspects of African-American culture over others and takes on other aspects “ironically,” which is essentially a high form of mockery that isn’t really all that elevated in terms of thought when you think about it. Once again the joke is on people of color, who regardless of what side of this appropriation they stand on, have absolutely no control over the narrative surrounding it.