Cultural Appropriation, Centering And The Limits of Inclusivity. 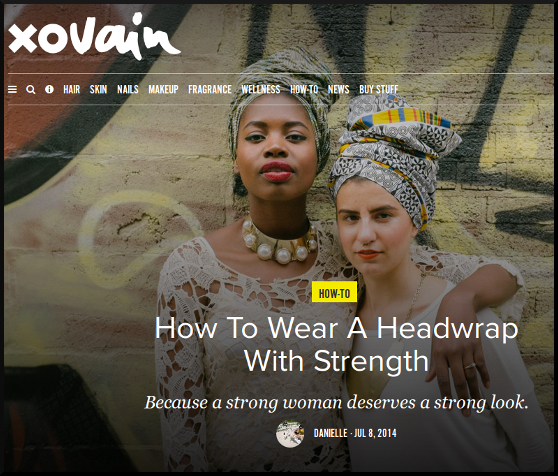 Fanm Djanm, the lovely headwrap collection and online shop brought to you by Haitian Harlemite Paola Mathe was recently featured on xoVain. While it’s not unusual to see published promotional pieces published in the Jane/Vain webspaces, this particular post, set up as a headwrap tutorial article was written not by Mathe herself, but by her good friend, a white woman and frequent contributor to the website.


I found the piece itself to be informative as it included some cultural context for the headwrap look, but I knew that once I scrolled past the end of the article, I’d immediately come upon the phrase “cultural appropriation” in many of the comments. As someone who works in fashion, and has seen the “tribal/ethnic” look have a moment every few seasons, I’m pretty familiar with cultural appropriation when it comes to clothing. I also understand the need to be vigilant, and aware of cultural context, especially as black women, as we are often the first group erased to make way for appropriation, gentrification and “columbusing”.

The reactions to the xoVain post are coming at a critical time where multiple conversations about the erasure of black women from black spaces or spaces thought to be black spaces are taking place. From the discussions regarding a post featuring a white woman on natural hair blog Curly Nikki to the epic shade delivered by Nicki Minaj at the BET awards over a week ago, it’s clear that black women are working to protect our image and our presence and that this is an amazing and necessary thing.

Optics matter, images tell stories and reflect cultural attitudes, they can also include or exclude. Many of the arguments about inclusivity in black spaces falsely equate the presence of a white person as the end all and be all of white supremacy. There are “diverse” spaces where white supremacy is alive and well. I have a feeling that if Sarah or Iggy had the same physical appearance but a different racial identity/ethnic identification, say as mixed or another race that doesn’t fit into the black/white dichotomy of American racial politics, the reactions to them would be markedly different. A lot of frustration at their presence stems from an unrealistic desire to create spaces for black women and women of color and essentially anyone that isn’t white that are egalitarian, but sealed off from a white presence or gaze. Such a desire often ignores the reality that the centering of non-black women and other women of color can also often stem from anti-blackness and white supremacy. The real issue is not their presence but the disrespect and lack of sensitivity to context that both of these women have repeatedly displayed.

But, there is much more to race relations in the United States than a black/white dichotomy and such attempts often devalue experiences and erase ethnic/cultural identity for women of all races. Never mind that many of us in a black or WOC space might have white parents, white significant others, white friends, and white business partners. Given socioeconomic disparities and the realities of ownership in this country, being “sealed off”, is essentially impossible. And, no matter how pro-black or pro-POC you might see yourself as, chances are, you’ve internalized certain negative cultural attitudes. As the saying goes, “fish don’t know they’re in water”.

We can’t wall ourselves off, but we can center ourselves in the spaces we create. Part of centering ourselves means looking at black or women-of-color spaces critically and questioning them. It means demanding a clear, outlined mission from such spaces and demanding understanding, respect and empathy from all visitors to those spaces. And if needs aren’t met, and concerns aren’t heard, sometimes it’s best to simply leave. Being critical is not divisive or even worse, “bitter”. In many ways the conversations around Curly Nikki and Iggy Azalea are, sadly, taking place much too late. Both the natural hair movement and hip-hop have been tinged with shadism, colorism, texturism, and the outright exclusion of black women for sometime now. And those that have trying to bring this up are often accused of being divisive, hateful or bitter. It shouldn’t take the presence of a white person to finally have voiced concerns heard and processed. And if a space or a movement is strong and centered around black women, the presence of a white woman or non-black person shouldn’t threaten or dismantle it.

In many ways inclusion is necessary and part of a business, as are relationships and partnerships. Articles like the xoVain piece are properly centered as the post prominently features Paola Mathe alongside her friend. We know what we are looking at, who made it, and where it came from.

Finally, if you are in the market for a lovely headwrap or some jewelry, head over to Fanm Djanm.