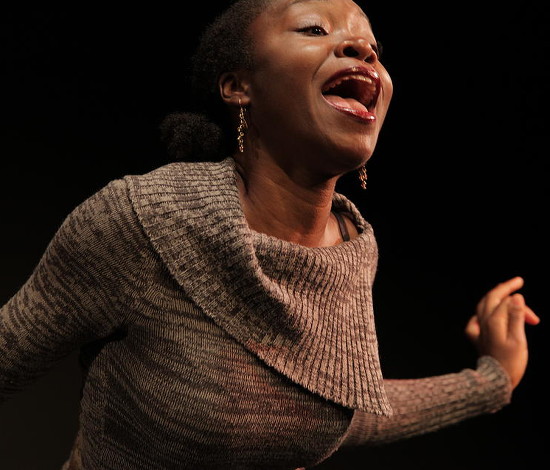 Echo Brown is a writer, performer, and Dartmouth graduate who grew up poor in Cleveland Ohio and is now based in Oakland, California. Her autobiographical one-woman show “Black Virgins Are Not for Hipsters” takes a look at black identity, stereotypes, microaggressions, and how black women’s sexuality is treated in the age of liberalism.


Brown dances, sings, and gets physical as she channels a woman contemplating gender, race, and politics in anticipation of losing her virginity,

Echo is about to lose her virginity to a good looking white hipster that she met on Craigslist. This will happen in ten minutes. That gives Echo just enough time to do exactly what you shouldn’t do right before you lose your virginity: contemplate America’s racial problems. Echo will pray to all of the gods, call her best friend over 20 times, talk to her cat about the meaning of life, and ask some tough questions about love and race in “post-racial” America.

” It’s as if you get on stage and share your deepest, darkest secrets. Putting my sexuality out there in front of people can makes me feel very exposed,” Brown tells the Daily Democrat.

After growing up in poverty and making it to an Ivy League university, Echo Brown, who has spent time in various parts of the United States has a keen eye for the different brands of regional racism in the United States.

“At Dartmouth I had people calling me (the n-word) while I walked across the green,” she says. “That doesn’t happen in California but in some ways it’s harder because at least on the East Coast, you know where people stand. Here it’s more of a Jedi mind trick,” Brown says.

The play also takes a sharp, honest look at how black women’s sexuality is treated in both our communities and in larger society. Notions of virginity and purity, and the narrative of “fast-tailed” girls can have a lasting affect of young black women trying to come into their own.

“The over-sexualization of black women has very much impacted me and my development as a person,” says Brown. “It’s very hard to find multidimensional portraits of black people in the media while white people can represent the full spectrum of behavior.”

While “Black Virgins Are Not for Hipsters” was originally intended out as a “fun little piece about online dating in the Bay Area,” in the era of OK Cupid, Brown ended up going deeper, mixing heavily, deeply personal experiences with humorous observations.

Watch a trailer for “Black Virgins Are Not for Hipsters,” and head over to www.virginhipster.com for ticket info if you think you might be in the Bay Area in the near future.