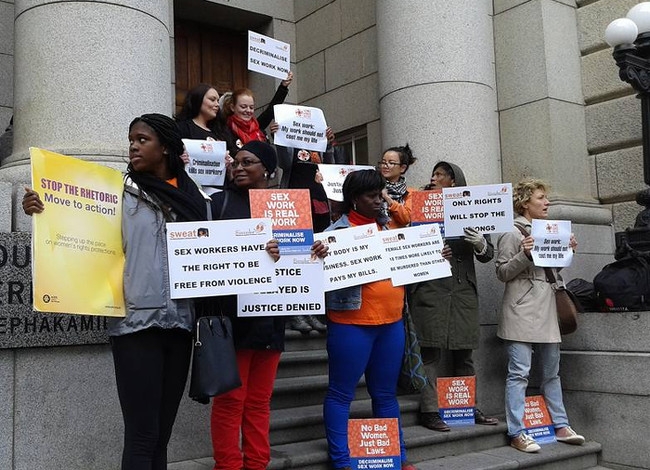 Demonstrators outside of a Cape Town courthouse. Image via SWEAT.

South African photographer and artist Zwelethu Mthethwa is best known for his body of work, but his murder trial seems to be getting little attention, both in his native country and abroad.

An internationally acclaimed artist, Mthethwa is represented in South Africa by the Everard Read and BRUNDYN+ galleries, and internationally by Jack Shainman Gallery. According to Hyperallergic, BRUNDYN+ featured his work in their booth at Art13 London fair last month.

In April of 2013, Mthethwa was accused of murdering Nokuphila Kumalo, a 23-year-old sex worker. Kumalo was found dead in Woodstock, a suburb of Cape Town, South Africa. Investigators were lead to Mthethwa through CCTV footage, which is said to show Mthethwa repeatedly kicking and stomping Kumalo before getting into his car and driving away from the scene. After two years of delays, the murder trial of Mthethwa began in Cape Town. He pleaded “not guilty.”

Zwelethu Mthethwa rose to fame and international prominence as a photographer through his candid images of working class South Africans. His murder trial has sparked a debate about a particular class of South Africans is treated — sex workers. Sadly, sex workers are killed on the job at a disproportionately high rate in the country, and very few of the murderers actually go to trial. While Mthethwa’s murder trial isn’t receiving a lot of international coverage, his popularity likely contributed to the case being covered in any capacity.

Advocacy groups like the Sex Workers Education and Advocacy Taskforce (SWEAT), and Sonke Gender Justice have been outspoken about the trial from the start. Both groups openly condemned the two year trial delay and have appeared in demonstrations outside the Cape Town courthouse to demand justice for Kumalo and rights for sex workers.

“There are many cases of sex workers being killed that haven’t reached high court level,” Lesego Tlhwale, a SWEAT spokesperson tells Hyperallergic. “Zwelethu’s status as an international artist increases the status of the crime. People wonder how an artist can do such a thing. We will continue to be active. Not just in this case — whenever there is a case. We will have a presence.”