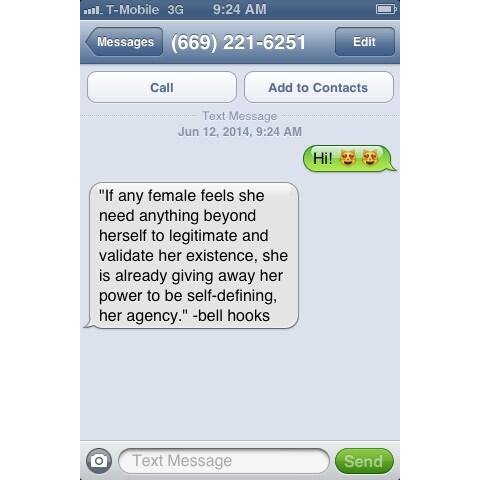 When I was in college, I remember female friends passing around a random number known as the “rejection line“. It was a number, with an NYC area code, that annoyed ladies could give to persistent men asking for their digits, instead having to make something up on the fly.


But now, thanks to an anonymous woman, ladies who feel pressured to give out their phone number can not only reject, but educate. According the creator of “Feminist Phone Intervention”, (669) 221-6251,

because we’re raised to know it’s safer to give a fake phone number than to directly reject an aggressive guy.

because we’re raised to know that evasion or rejection can be met with violence.

because women are still threatened and punished for rejecting advances.

because why give any old fake number, when you can have bell hooks screen your calls?

Sarah Mirk of Bitch Magazine already tested the number out and received the above message. The number currently has two unique outgoing messages.