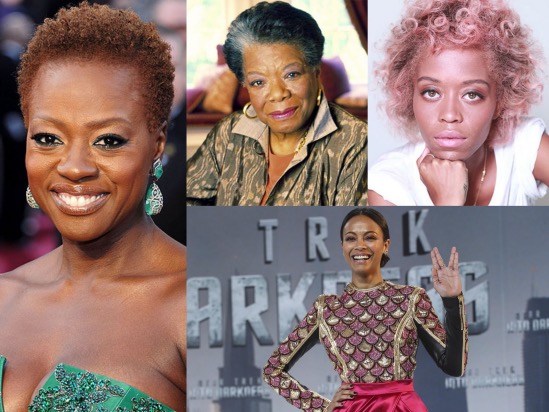 “On Friday, Leonard Nimoy the man who gave life to one of the most iconic figures in science fiction, Star Trek’s Mr. Spock, passed away at 83 years old. His death triggered a day of mourning in the sci-fi fan world as fans of Star Trek both young and old, from all walks of life took to social media to talk about not only the man but the character that had touched so many lives. Because while Uhura and Sulu might have looked like us, Spock felt like one of us. And for “blerds,” urban geeks, and just “Trekkies” of color who in their daily life felt like the redshirt in the away team who you knew might not make it back to the ship, it was Spock who we identified with in some way or another. And it was through his character that many social issues were explored and continue to be explored. And it was the man Leonard Nimoy, whose life and sensibilities gave us Spock.”

Selfies allow black women to say we are here, and we are beautiful

“Our societies celebrate a singular definition of beauty to the exclusion of others. I think of this when I see stray posts of young women of color – black girls, dark skin girls – sharing their carefree moments, perfect and imperfect. Resolution with dark skin in dark light still is a challenge for smartphone cameras, yet I adore how adaptive and inventive we are with that limitation.”

What Happens When A Stylist Can’t Work With Your Hair

“There’s a pressure among Black models to be relaxed,” Brandee says. The reason to show up with relaxed hair or a weave is partly practical: You can either have the same hair as everybody else…or you could be different. And, when the odds are pretty good that you’ll be one of a handful of non-white girls backstage, it can make sense to minimize the attention you draw to yourself.

Gender-based violence, for example, is a prevalent phenomenon that not only affects transgender people, but LGBTI communities in general. Cases often remain unreported due to the victims’ fears of disclosing their gender or sexual orientation to the police, which potentially renders them open to secondary victimization via institutionalized homophobia. Many transgender women I interviewed experienced discrimination at police stations, resulting in their cases not being taken on or pursued.

“Activism is campaigning to make a change. Twitter as a medium is responsible for a lot of change through inspiration, connectivity, etc. So why are some users and some causes mocked and derided while others are held up as being on the edge of the Digital Frontier?”