Hey. What’s That in the Background? A Prop? A Tree? Nope. Just Some Maasai.

Valentino’s dreams of Africa are definitely raising some eyebrows. Last fall, the brand sent a mostly white cast of models down the runway in cornrows for an African-inspired Spring/Summer 2016 collection. The choice, naturally drew sharp criticism.. Come ad season, Valentino is out of Africa again, this time in a Maasai village in Kenya’s Amboseli National Park. And once again, a mostly white cast sports cornrows and dreadlocks, for a series of ads shot by Steve McCurry. 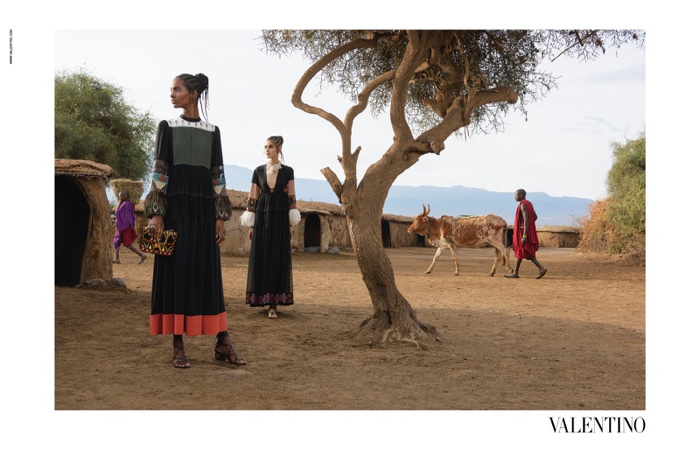 Of course this wasn’t the first time Maasai have made an appearance in the background of an ad or photoshoot, and it likely won’t be the last. Despite ongoing criticism, the industry’s love affair with one of the most photographed groups of indigenous peoples in the history of fashion and advertising, probably isn’t going to end any time soon.

The Maasai are recognized world-round for their distinctive customs and modes of dress, particularly the red tartans they often sport. Images of Maasai men, women, and children grace many a geography, sociology, or anthropology text.

In 2011 various iterations of the Maasai tartan showed up on high fashion runways. Designer Thakoon created coats and draped dresses out of the fabric, while Louis Vuitton sent models down the runway in head-to-toe tartans for its Spring 2012 menswear collection. The Louis Vuitton Maasai scarf quickly became a hot commodity, and spurred a larger conversation about cultural appropriation and indigenous erasure.

Isaac ole Tialolo, a Maasai elder, spoke out about the commodification of Maasai traditions in 2013. ole Tialolo joined forces with Light Years IP, a Washington, D.C. based NGO that works to secure Intellectual Property Rights in developing countries.

“I think people need to understand the culture of the others and respect it,” he told the BBC. “You should not use it to your own benefit, leaving the community, or the owner of the culture, without anything. If you just take what belongs to somebody, and go and display it and have your fortune, then it is very wrong…very wrong.”

ole Tialolo estimated that blatant and ongoing use of the Maasai name and artistry by companies like Louis Vuitton, Land Rover, among many other brands, could be worth billions in the long term. In recent years, a growing crop of ethical designers like Tereneh Mosely of Idia’Dega and Aurora James of Brother Vellies have stressed respectful collaboration and attribution in their brands, something that is still sadly, rare.

ole Tialolo efforts are similar to that of the Native American Navajo who famously sued Urban Outfitters in 2012, over the use of the Navajo name, which was used to sell underwear, socks, and flasks. While the retailer argued that term “Navajo” was a generic descriptor, a judge ruled that the Navajo could continue with the suit. As of 2015, the case is still ongoing.

But, will a hard won fight over Intellectual Property Rights quell the steady stream of cringe-worthy and awkward images that the fashion industry keeps churning out? The trope of “background Maasai” predates Valentino by several years.

Here’s model Laetitia Costa in a 1998 issue of Sports Illustrated.

In 2013, actress Keira Knightly went to the Cottars Camp in the Masai Mara, for a Vogue photoshoot that can best be described as “colonial chic.” 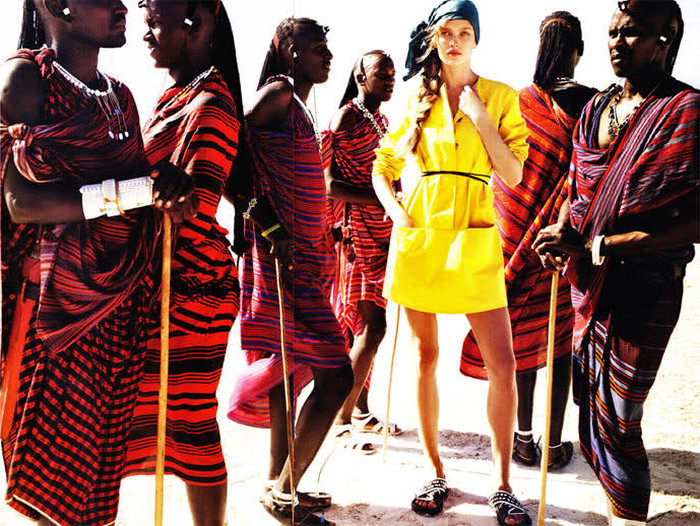 While these images are created with consent and often with the intention of charity, the juxtaposition of black and brown bodies as part of the exotic scenery is problematic, to say the least. The majority of the Maasai live below the poverty line, despite frequent appearances in promotional venues for multi-million dollar companies. Who really stands to benefit from all of these images?