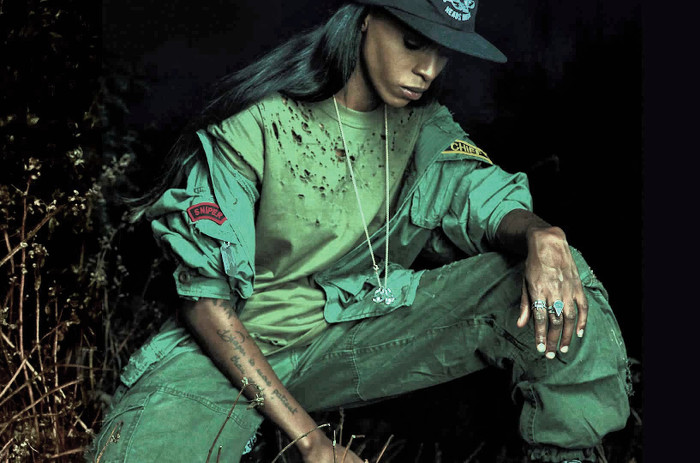 Angel Haze, Back to the Woods Cover (edit).

For decades, hip-hop has given a voice to the voiceless, becoming a powerful global movement for self-expression. From social issues to personal beefs, no subject matter has been off limits for the genre. Now, hip-hop is being used to discuss an important issue affecting the black community: mental illness.

A recent study by Cambridge University stated that hip-hop can be a powerful tool for dealing with mental illness. According to the National Alliance on Mental Illness, African Americans are 20% more likely to experience mental health problems than most of the population. Black women are more likely to experience physical symptoms related to mental health problems. Although many stigmas and obstacles have prevented the black community from dealing with mental illness, black women in hip-hop have been providing a much needed voice.

Social media and music sharing sites like DJBooth, SoundCloud, and ReverbNation have opened up hip-hop to new conversations and identities usually considered taboo in the genre. Queer female MCs like Angel Haze and nerdy MCs like Sammus have been given a large platform, not usually allowed in mainstream hip-hop. As a result, the genre has been made even more accessible to all listeners.

“When ya floating in oceans hopeless soaking in misery/Headphones on you link yourself with the synergy” – Angel Haze, “Angels & Airwaves”

I have been experiencing depression on-and-off since I was in high school. For years, I felt so alone in my experience due to stigmas, as well as a lack of representation in the media. In 2014, I finally started to see my experiences reflected when I heard the track “Angels and Airwaves” by Angel Haze. The song discusses depression and suicide in a frank manner that comes from the artist’s personal experiences.

In 2014, Angel Haze also penned an essay for Noisey discussing the epidemic of depression on youth.

“A lot of people think that fame is a cure for depression,” the rapper wrote. “Everybody wants to be like the stars and half the time the stars don’t even want to be themselves, You have to look at like the drug stories, the Whitneys, all those people that are so severely unhappy that they wake up everyday depending on a substance to keep them alive. I mean I look at my friends and they’re all suffering from depression. In the past three years, three of my friends have attempted suicide.”

On New Year’s Day 2008, I considered committing suicide by jumping off of the highest point at my older sister’s apartment. The only reason that I didn’t go through with it was because I didn’t want to hurt my family. Although my depression became more manageable, there are still times that I feel bad enough to consider suicide.

“Mad at me cuz I’m losing my mind/Had to leave at a terrible time/Prednisone — I can barely breathe/Now the pressure gone but I barely sleep” – Sammus, “1080p”

Sammus is another lyricist who has shared her mental health struggles in her music. She released a song and music video called “1080p” that explores how she found the courage to seek therapy. In a recent interview with SUPER.selected., she stated that she made the song to alleviate the pain that came from pretending everything was okay.

“This song was thus born out of my initial efforts to live as my most authentic self, a journey that has focused on being comfortable feeling and sharing the good stuff and the not so good stuff. In the process of sharing my story, I’ve realized that many people struggle with these same issues — so in that sense I also decided to tell my story to assure others that it’s okay to feel bad sometimes, and it’s also okay seek assistance.” she explained.

Another MC with a similar goal is Dijah, who used her experiences with mental illness to create her new EP Blue. The title track “Blue” explores her feelings of depression.

To accompanying the release, Dijah also made a Tumblr blog called WhyisDijahBlue, where she detailed her battle with depression and anxiety. The site also allows readers to submit their feelings and share their thoughts. Dijah recently spoke with Blavity on what led her to create her EP and blog.

“I believe what finally made me so open about mental illness is that I realized suffering in silence was damaging me. It hurt to keep those kind of emotions inside. No friend or family really wants to hear that you are depressed. It makes a lot of people uncomfortable to hear about let alone share with somebody, so I figured if I pushed boundaries and found something within myself that I’ve experienced first-hand to write about, it would be easier to produce a project.” she stated.

Together, these women have started a conversation that needs to continue in hip-hop and beyond. They show that black women suffering from mental illness don’t have to be “strong black women”, but human beings who can express their pain and seek help. Hip-hop may not cure mental illness, but it can help us fight it.

About the Author.
Latonya Pennington is a freelance writer and rising poet from Alabama. As a freelance writer, she has written for places such as Atlanta Blackstar and The Mary Sue. She is also a proud black girl nerd who loves fantasy and sci-fi, American and Japanese animation, reading books, and learning about black music history.