Mike Brown’s Mother Was Not Aware of the Nature of the Artwork Before Visiting Controversial Exhibition. 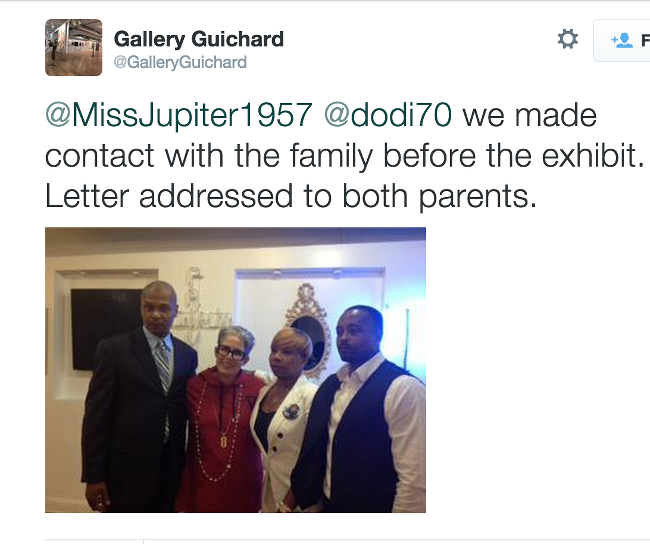 New details have emerged about the controversial art exhibition at Chicago’s Gallery Guichard which features a life-size replica of Mike Brown’s dead body at the scene of his death.


When activists and supporters of Brown’s family first expressed their distaste with the exhibition, the Gallery owner simply shot back with a picture of Mike Brown’s mother Lesley McSpadden attending the exhibition. The response, coupled with the fact that artist Ti-Rock Moore had reportedly reached out to the Brown family to ask for permission prior to the exhibition, made it seem like McSpadden approved of the offensive piece.

According to a recent article, published in the Guardian, however, McSpadden was not aware of the nature of the work,

Michael Brown’s mother, Lesley McSpadden , was in Chicago last week and attended the opening night of the exhibition. Before arriving, she learned that the piece specifically about her late son was not a photograph, as she had assumed, but an actual recreation of the scene.

She requested the gallery cover it up while she visited because it would have been too painful for her to witness, which they did.

Mike Brown’s father, Michael Brown, Senior, did not give his approval for the work at all. He spoke out against the piece, calling it “disgusting.”

“I really, really would like for them to take that away. I think it’s disturbing, disgusting … that picture is still in my head,” Brown, Senior told FOX 2 St. Louis.