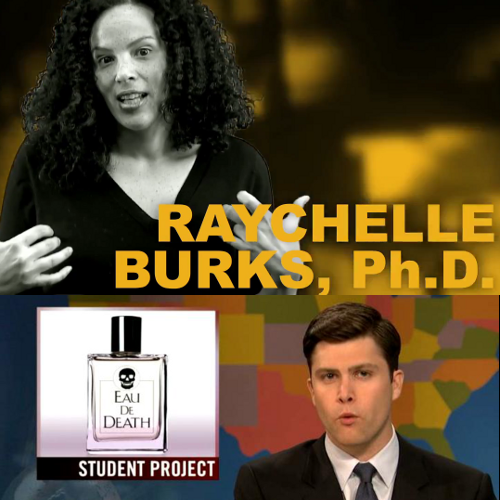 It’s no secret that “Saturday Night Live” has a history of issues with black women (heh), but apparently their writing staff also has some issues with fact-checking. This past weekend, Saturday Night Live’s recurring sketch “Weekend Update” misidentified Nebraska Ph.D. Raychelle Burks as a “male graduate student”. The segment also claimed that Burks’ “Eau de Death”, what the doctor herself calls a “thought experiment” in case of a zombie attack, was an actual project.


Here’s a clip from the funny, but inaccurate joke.

In another twist in this maze of misinformation, Burks’ professor was also misidentified as male. All in all, Dr. Burks’ has maintained her sense of humor in all this, stating in a post published to Slate:

“In the future, SNL, if I’m ever sorta the punchline of a joke, could you just use my true identity? Unless the joke involves hookers and blow. For those jokes, please use my male grad student cover.”

Here’s a video in which Burks’ explains the science behind “Eau de Death”.