#OromoProtests. Ethiopian Activists Use Social Media To Speak Out Against Oppression. 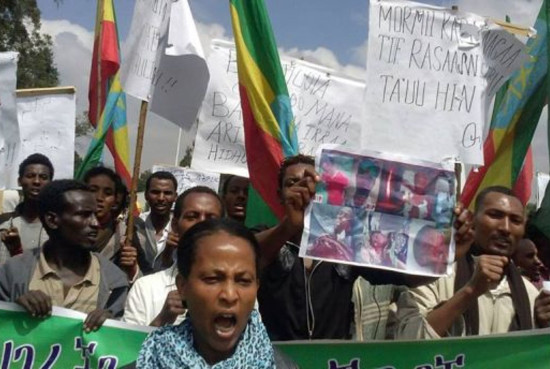 Image: Protesters in the Ethiopia’s capital Addis Ababa. Photo by Gadaa via Flickr

In the wake of a deadly government crackdown on voices of dissent, Ethiopian activists are taking to social media to bring attention to their suffering at the hands unjust rule.

According to a report by Human Rights Watch, security forces in Ethiopia have killed and injured dozens of protestors by opening fire during peaceful protests since November of last year. The protestors are expressing their opposition to the Addis Ababa Integrated Master Plan, a government initiative that seeks to expand the boundaries of the Ethiopian capital of Addis Ababa. With this new plan comes the mass eviction of many local farmers in what many are calling a “land grab.” The area of expansion is also home to approximately 2 million people. The new plan is also coming at a time when large swaths of land in Ethiopia are being leased to foreign investors from China, India, and Europe. Under the Ethiopian constitution, these activities are legal as all land in the country is automatically owned and controlled by the government.

The protests, which have been taking place in Oromia, Ethiopia’s largest regional state and home to Oromo ethnic group, one of the country’s largest ethnic groups, have spread to social media. Activists have employed hashtags and cell phone videos to bring attention to what is happening. Many have also called on foreign press and spoken out against U.S. involvement in Ethiopian politics and affairs.